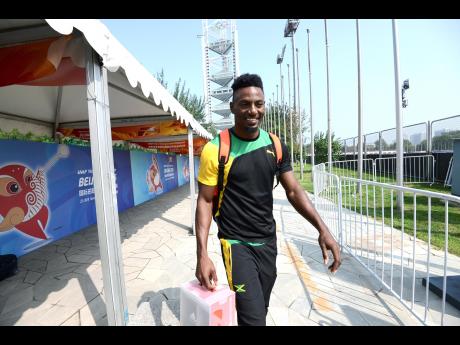 Ricardo Makyn
Rasheed Dwyer, at the training ground in Beijing ahead of competition. He knows it’s his time to shine in Beijing.

Rasheed Dwyer has had a strange season. Struggling for form, even at the Jamaica Athletics Administrative Association (JAAA)/Supreme Ventures National Senior Championships at which he finished fifth in the 200m. However, he exploded at the Pan American Championships in Toronto, twice logging sub-20 seconds times en route to a silver medal.

Dwyer clocked 19.80 in the semi-final to break Donald Quarrie's 44-year-old record before stopping the clock at 19.90 for second place in the final. He went on to win at the North American Central American and Caribbean (NACAC) Open Championships, which also brings with it a wild-card entry for the World Championships.

Only Justin Gatlin has gone faster than the Jamaican this year in the 200m. However, having finished outside the top three at the national championships meants he does not have an automatic qualifying spot in Beijing. He has been named to the 4x100m relay pool.

However, Dwyer is not holding on to any disappointments and is instead focusing on making the most of his first experience at the World Championships to prepare him for next year's Olympic Games in Rio de Janeiro.

"I'm really happy, this is my first major championships, I will take it as a motivation and not as a disappointment. I will use it as a stepping stone in my career and move forward from that," Dwyer said.

"It's a tremendous feeling to be in Beijing to compete for myself and my country. Unfortunately, I didn't perform as well at the trials, but after that I ran some really good times, and the JAAA has seen that I deserve to be here, and I'm very happy about that," he added.

"I'm a member of the 4x100m pool so I'm just coming out here to put in the work and see the outcome."

Dwyer, who competes regularly in the 4x100m at the Penn Relays, said he is willing to undertake any task given, pointing to cramps as the reason behind his sub-par performance at trials.

"Anything that I am given to do, I will do my best," he said.

"At trials, it was basically a physical problem. I got a cramp before trials and that was a really bad setback for me. Everything happens for a reason, though, and maybe God had a plan for me after the trials, and I came out and ran 19.80, and I'm really happy for that time," Dwyer noted.