It's silver and bronze for Jamaica in women's 200m 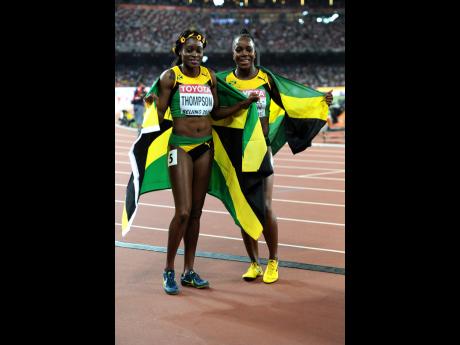 Ricardo Makyn
Elaine Thompson and Veronica Campbell-Brown celebrate after their medal-winning performances in the 200m final.

Jamaica's Elaine Thompson and Veronica Campbell-Brown thrilled hearts this morning winning silver and bronze in the 200m at the IAAF World Championships in China.

The Netherlands’ Dafne Schippers won the event in a championship record 21.63.

Thompson recorded a personal best 21.66 to take the silver.

"It's an amazing feeling, to come to my first World Championships and to leave with such a big PB and a medal," Thompson said.

The 23-year-old MVP Track Club athlete who has had an impressive season is making her first appearance at a major global championship and was the heavy favourite heading into the final.

Thompson led the race until the last ten metres when Schippers ran her down to clear the finish line in the lead.

"I tried to hold off but she is a strong competitor."

Former World and Olympic champion, Veronica Campbell-Brown’s roved her championship mettle with a run of 21.97 as she finished strongly to gain the bronze medal.

"I am blessed, it's been a tough year but I'm happy for this blessing," she said.

"Criticism motivates me so when they say I should retire that pushes me to do even better."

Jamaica’s other representative in the final, Sherone Simpson, finished eighth in a season best 22.50.