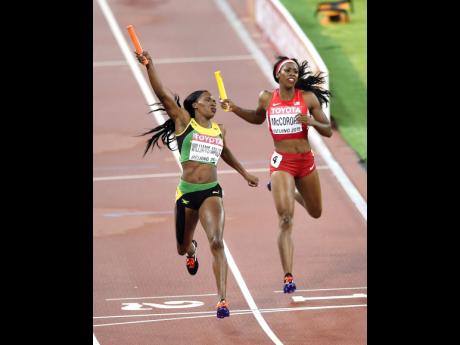 Ricardo Makyn
Jamaica's Novlene Williams-Mills (left) raises her arm in triumph after crossing the finish line ahead of the United States' Francena McCorory to win the women's 4x400m inside the Bird's Nest Stadium in Beijing, China, at the 15th IAAF World Championships in yesterday.

Buoyed by the confidence of fielding four persons in the 400 metres final a few days earlier and simply tired of losing to the Americans, Jamaica's women's 4x400m relay team stepped on to the Bird's Nest's mondo track knowing that something had to give.

It had been 14 years since the quartet of Sandie Richards, Catherine Scott, Debbie-Ann Parris, and Lorraine Fenton won the 4x400m at the 2001 World Championships in Edmonton, Canada.

Back then, the Jamaicans beat Germany and Russia into second and third, respectively, with Fenton, World and Olympic silver medallist, making the most of a mistake from the US anchor leg runner, Suziann Reid, who had dropped the baton after receiving it with a 10-metre lead.

The United States has since won the event at four of the next six World Championships that followed.

This time, however, the Jamaicans, who are perennial bridesmaids, having won four silver and two bronze medals, were more confident than ever

after their four athletes - Christine Day, Shericka Jackson, Stephenie-Ann McPherson, and Novlene Williams-Mills - had earlier created history by becoming the first quartet from the same country to compete in a World Championships 400m final.

Cancer survivor Williams-Mills showed that she is just as determined on the track, as she tracked American Francena McCorory like a predator stalking its prey, striking at the top of the 100m straight and pulling away to lead the Jamaicans home in a world-leading 3:19.13, with the Americans finishing second in 3:19.44 and