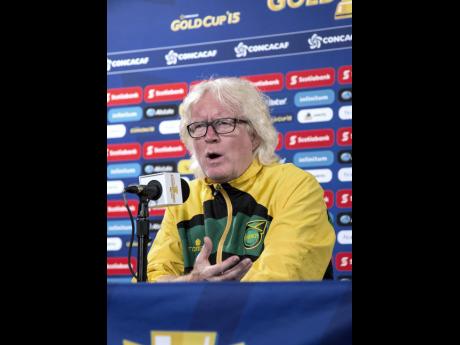 REGGAE BOYZ head coach, Winfried  Schäfer, insists that Friday's World Cup Qualifying football match against Nicaragua will be the most significant for his team.

In a year when Jamaica shot their way into the history books on several fronts,  Schäfer outlined that nothing supersedes clearing the first hurdle on the Road to Russia campaign, which is geared at qualification for the 2018 World Cup Finals.

"It's more important than the Gold Cup,"  Schäfer noted, referring to Jamaica's participation in the CONCACAF flagship tournament last month, when they advanced to the championship game against Mexico before losing 3-1.

Jamaica thus became the first Caribbean nation to play in the Gold Cup final, having beaten the United States on home soil for the first time ever, with a 2-1 win in a semi-final match played in Atlanta, Georgia.

Prior to the CONCACAF Gold Cup, Jamaica were the first Caribbean country to play in the Copa America, having been an invited guest to the South American championship.

Schäfer said the Reggae Boyz are pumped up for Friday's match.

"It's the first qualification for the World Cup group. All the players are highly motivated," he said. "We need a full stadium behind us, it's important.

"We have to play with (a lot of) concentration, be disciplined, and everybody has to play for the team,"  Schäfer underscored. "It's not easy."

The coach has also recalled Alvas Powell to the national senior men's squad.

Powell, 21, walked out on the national team at the Gold Cup following their first-round 1-0 win over El Salvador at BMO Field in Toronto. At the time Schäfer indicated that he would not recall the player, but with barely a month gone and with the crucial World Cup engagement at hand, he notes that the unavailability of key players has forced his decision.

The countries will play at home and away, this weekend at the National Stadium and in Nicaragua next week Tuesday, with the winners advancing to the 12-team CONCACAF semi-final group stage on aggregate.

"We have problems in the defence," the German coach said. "We don't have Wes Morgan and we've lost Jermaine Taylor (injury), who won't play for the next two months.

"Daniel Gordon is injured (knee ligament) and will be out for six months," he added of another regular option.

Starting midfielders Joel (Jobi) McAnuff and Garath McCleary, both based in Britain, are also unavailable as  Schäfer pointed out that they have remained with their wives who are expecting.

"That is why I took Alvas back,"  Schäfer reasoned. "He called me and said 'sorry for this', and I told him when you come back, you have to talk with our team. He's a young player and he told me he made a mistake. I think we'll give him a second chance.

"He loves his country and we need him, we have problems in defence. We have two defenders from Montego Bay and one from Portmore.

"For us, it is important to win the qualification. I think I have enough experience to know what is in the head of Alvas and he wants everything good for Jamaica," the 65-year-old  Schäfer expressed. "But first, he has to talk with all the players here."