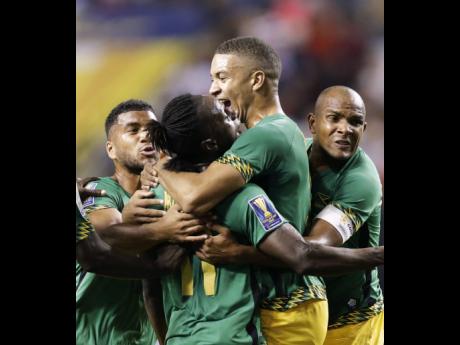 AP
File Michael Hector (second right) embraces teammate Darren Mattocks (second left) after Mattocks scored a goal during the first half of a CONCACAF Gold Cup semi-final against the United States on Wednesday, July 22, in Atlanta. Rodolph Austin (right) and Adrian Mariappa are also involved in the celebration. Jamaica won 2-1.

The 23-year-old, who represents Reading in the League Championship, made his international debut three months ago and has since has been capped six times by the Reggae Boyz.

Hector underwent a medical at Chelsea's Cobham Training Centre yesterday before signing off on the contract hours before the 6 p.m. (1 p.m. Eastern Caribbean time) transfer deadline.

The player, however, will remain at Reading on loan for the remainder of the season.

"Chelsea Football Club have today completed the signing of Michael Hector from Reading," Chelsea confirmed on their website.

"The 23-year-old centre-back, who has signed a five-year-contract, will return to Reading and spend the remainder of this season on loan at the Madejski Stadium."

Hector was born in London, but qualifies to represent Jamaica through his father, whose family hails from Kingston.

The East Ham-born player has been described as a boyhood Chelsea fan and tweeted late yesterday, "can't believe today".

Hector made 49 appearances in all competitions for Reading last season, while scoring three goals, in what was a breakout season.

He was called up for Jamaica's Copa America campaign and started all three matches against Argentina, Paraguay and Uruguay.

Hector also featured in Jamaica's successful run in the CONCACAF Gold Cup in July, when the country became the first Caribbean side to reach the final, before losing to Mexico.