Potcheen for None Such Trophy feature race at Caymanas Park 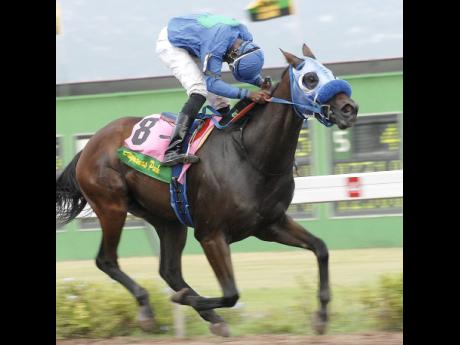 Champion sprinter POTCHEEN should defy topweight once again and win today's grade-one feature over 1200 metres for the None Such Sprint Trophy at Caymanas Park.

The $1.2 million race is run annually in honour of the legendary native-bred sprinter None Such, who was Horse of the Year in 1967. Significantly, None Such won more than 20 races in an illustrious career and was ridden to victory on many occasions by Hall of Famer Kenneth Mattis, who died in October last year at age 78.

Fittingly, the Kenneth Mattis OD Memorial Trophy over 2000 metres for overnight allowance horses will be run as the supporting feature on the card, this attracting seven starters, including top contenders ROYAL VIBES, MIRACLE STAR and BOLD AVIATOR.

POTCHEEN, who shoulders topweight of 57.0kg with customary rider Omar Walker aboard, is out for the first time since winning the Lotto Sprint Trophy over 1100 metres on May 23, a race in which he closed rapidly on the rails to beat the fleet-footed FORTUNEONEHUNDRED by a neck in the fairly good time of 1:06.0.

In that race, the Harry Parsard-trained POTCHEEN had stable-companion UPPA TUNE behind in fifth, while further behind were PETE'SWILDONE and the 2013 derby winner, PERFECT NEIGHBOUR.

All three renew rivalry with POTCHEEN on slightly improved terms at the weights, and with UPPA TUNE and the Wayne DaCosta-trained PERFECT NEIGHBOUR having looked razor-sharp at exercise, it could be closer.

Both UPPA TUNE and PERFECT NEGHBOUR have won their subsequent races, the Parsard-trained UPPA TUNE capturing the Reggae Trophy over the straight on July 11, and PERFECT NEIGHBOUR the Prime Minister's Stakes over 2000 metres on August 6.

UPPA TUNE, in particular, represents the genuine speed in this small field, and with Paul 'Country' Francis retaining the ride aboard the versatile American horse, he will have to be caught.

However, a well-prepared POTCHEEN won't be far off turning for home, and his now-famous stretch run should prove too much for UPPA TUNE in deep stretch.

Other firm fancies on the card are TARANIS (Ellis up) to go one better in the second race over 1820 metres, FORCE DE JOUR to repeat in the third over the straight, down-in-class INFANTRY OFFICER in the sixth, DOOLAHIN in the eighth, and ROYAL VIBES in the Kenneth Mattis OD Memorial Trophy.