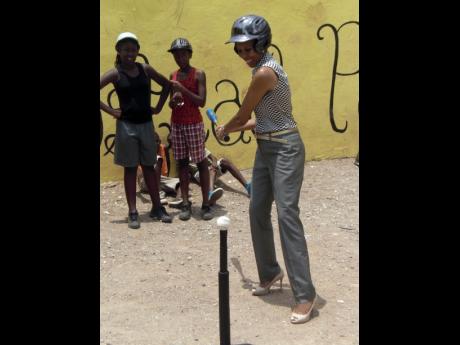 Contributed
Business executive and politician Fayval Williams trying her hand at baseball with the kids in Back Bush, St Andrew. 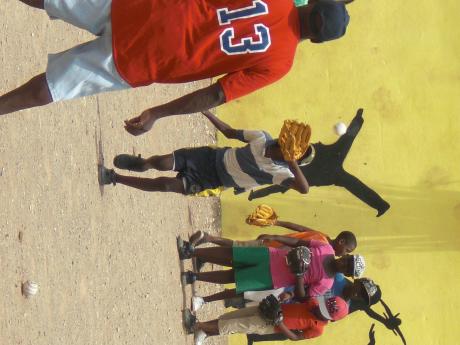 Contributed
Children from the Back Bush area in Mountain View participating in the Summer League baseball camp.
1
2

Summer 2015 has been a blast for a group of over 40 youngsters from the traditionally tough community of Back Bush in Mountain View, St Andrew, courtesy of an exciting three-week baseball clinic which was staged by a team of professional coaches, with support from a prominent political and corporate representative.

Leon Taylor, a professional scout for the Pittsburg Pirates Baseball Club in the United States and assistant district administrator for the Jamaica Little League Baseball Association, was in charge of the clinic recently when the one-day-a-week exercise entered its final leg. He and other coaches took the youngsters, aged between six and 16 years, through the fundamentals of the sport before treating the community gathering to an impromptu game.

In between the activities, Taylor outlined that little league baseball is played in 86 countries globally, including Jamaica, with the sport being represented in places like Treasure Beach, St Elizabeth; Manchester, Portland and Westmoreland. Drawing on the accepted position that Jamaica produces an abundance of natural athletic talent, he said it is logical that the phenomenon will extend to baseball.

"Professional baseball players earn on average about US$1 million a year. With good opportunities through early introduction to the sport and the availability of scholarships, youth from Jamaica can make it there, with the right guidance and attitude, of course," he indicated.

The head coach said playing equipment will be left with the youngsters after the clinic, with two teams being formed to continue to train and compete with each other.

Business executive and Jamaica Labour Party (JLP) caretaker for Eastern St Andrew, Fayval Williams, who partnered with the coaching panel and the Back Bush community to stage the clinic, was elated at the success of the event, to which there were continuous enquiries from youth groups engaged in other summer activities in neighbouring communities.

"I am really delighted to partner with the Little League Baseball Association to bring this initiative to the community of Back Bush in Mountain View," she said. "It is a relatively different sport from what we are used to in Jamaica, but it is exciting and the kids clearly love it."

Williams said offering opportunities to the youth fell within both her corporate and political responsibilities.

"The opportunity that is provided to them can be really meaningful when fully exploited," said Williams, who personally tried her hand at the game. "Sports in general fosters discipline and the kids are learning about this very important factor. Things like rules and teamwork help to shape their overall development, whether in the sport or otherwise in life."