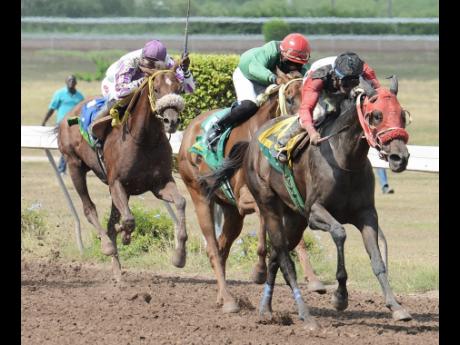 FORTUNEONEHUNDRED, who beat a good field over 1300 metres in the Seek Exercise Book Trophy on August 15, is tipped to defy topweight of 57.0kg and capture the Saint Cecelia Cup open allowance feature over the same distance at Caymanas Park today.

Trained by 14-time champion Wayne DaCosta, the American-bred five-year-old horse made amends for his near miss against TRADITIONAL PRINCE over 1100 metres on August 1 with a 1 1/4-length victory over his old rival in the Seek Trophy a fortnight later, covering the distance in the smart time of 1:17.3, behind splits of 23.2, 46.1 and 1;10.4 for the first six furlongs.

Title-chasing jockey Robert Halledeen, who is making few mistakes in his bid for a first jockey's title, again has the ride.

from the likes of the Patrick Lynch-

trained TRADITIONAL PRINCE, TIMEFORARMS, PHINEAS and down-in-class PETE'SWILDONE, FORTUNEONEHUNDRED should use his speed to best advantage and make all from the number one post position.

He has caught the eye at exercise in preparation for this trophy and, although 2.0kg worse off with main rival TRADITIONAL PRINCE, is ready for action once again and should hold TRADITIONAL PRINCE, TIMEFORARMS and PETE'SWILDONE at bay in deep stretch.

The speedy three-year-old filly, MOM'S STUDENT, winner of the Jamaica Oaks in April, ran encouragingly behind TIMEFORARMS over 1200 metres on June 6 at this level, finishing a fair seventh after racing prominently into the straight.

Reporting well refreshed from a three-month respite, MOM'S STUDENT has been taken to task at exercise by trainer Fitzroy Glispie and while expected to inject speed into the race with her light impost (50.0kg), should be outclassed by the more experienced FORTUNEONEHUNDRED approaching the distance, leaving TRADITIONAL PRINCE to carry the fight to my selection once again.

Other firm fancies on the card are recent winner FRANKENSTORM, to repeat in the first race over 1000 metres (round); WHO'S BOSSY, in the second for maiden four-year-olds and up; EDISON in the fifth over the straight for overnight allowance horses, as well as CLEARLY OURS in the sixth and the well-prepared DINNER AT SEVEN in the eighth over the straight.