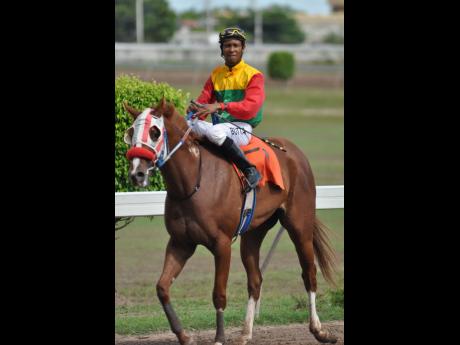 The Pick-9 had no takers at Caymanas Park on Wednesday and the carryover to tomorrow's meet stands at $1.3 million.

Both Super-6s were caught and start anew with the guaranteed minimum of $750,000.

We look at the first Super-6 which commences with a competitive looking $180,000 claiming race over 1000 metres round, which should see the down in class horses FRANKENSTORM (Rayan Wilson up), LIGHT BRIGADE (Robert Halledeen) and DAGGA DAGGA LINKS (Andre Martin) the ones fighting out the finish in an eight-strong field.

All three are better than this level of racing and although not always 100 per cent sound, LIGHT BRIGADE, in particular, could reply with a long overdue win with title-chasing Halledeen riding for that astute trainer Lawrence Freemantle and high profile owner Carlton Watson.

Preference, however, is for FRANKENSTORM, who won easily over 1100 metres in the fairly good time of 1:08.2 on August 26. The five-year-old son of Outrigger was claimed from trainer Neive Graham by Dennis l Lee out of that race and should bring fitness into play and win from LIGHT BRIGADE, now dropping down two classes with some indifferent form.

Having finished second in her last two races, WHO'S BOSSY (Kuri Powell up) should come into her own and win the second race over 1500 metres for maiden four-year-olds and up.

Owned and trained by Jamaica's lone female conditioner Margaret Parchment, WHO'S BOSSY caught the eye in recent weeks when finishing second to ROYAL GIRL and DARLIN in separate races over middle distances and should go one better at the expense of WESTERN FAITH and NO PAIN NO GAIN in a field of seven.

MISS DOROTHY, who just failed to catch ABOVE THE RADAR over 1820 metres recently, looks tempting at the weights with only 52.0kg in the third race over 1800 metres and her final rattle will now prove hard to withstand in a field of eight.

Sadiki Blake, who won aboard her over a mile on August 6, has stuck with the ride and despite the good claims of bold front runner GRAN CORAZON and GEORHIAMYLOVE, the five-year-old mare is given the edge.

Briefly, recent winner MARISHA STAR (Wesley Henry up), down in class EDISON (Omar Walker aboard) and CLEARLY OURS (O'Brien White) should provide the answers for the last three races in the first Super-6. Their respective dangers are GENUINE FRIEND, PRINCE ANDREW and AQUILO.