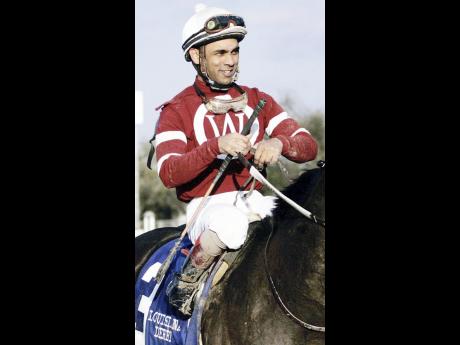 T&T's Cummings on trial at Orlando

Trinidad and Tobago Gold Cup star Keron Cummings is looking to seal a move to Orlando City after going on trial at the Major League Soccer club, the Trinidad Newsday is reporting.

The 27-year-old has been in excellent form recently and was on target for T&T in their 3-3 draw with CONCACAF powerhouse Mexico in their friendly international in Sandy, Utah last week.

According to Newsday, Orlando City wanted the forward to start the trial immediately following the fixture, but he opted to return home first.

He currently plays for T&T Pro League side North East Stars, and has also played for W Connection and Central FC in the past.

Jamaican Shaun Bridgmohan made all the headlines at Churchill Downs on Saturday, stealing the US$100,000 Open Mind Stakes as part of four winners on the day's 11-race card.

Riding in one of the day's co-features, the experienced 36-year-old jockey partnered with 2-1 chance Spelling Again to make virtually all the running in the six-furlong trip and beat the three-year-old and upwards fillies and mares by a length.

The victory summed up a marvellous day for Bridgmohan, who also won race three with Sweet Bagg O Jo, making all the running over six furlongs.

In another six furlongs contest in race six, Bridgmohan stalked with favourite Bandwith, before snatching the lead in the stretch and drawing off to trounce the two-year-old maidens by 61/4 lengths.

Bridgmohan wrapped up his fourth win in the day's final race when he steered 3-1 chance Smart Moon to a three-quarter length win.