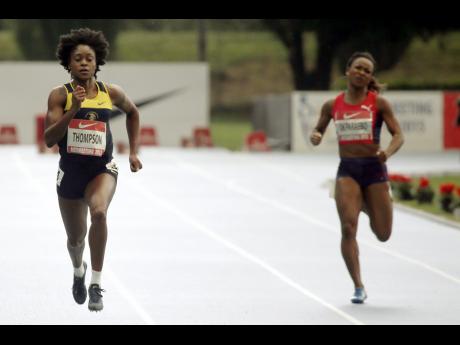 AP
Jamaica's Elaine Thompson (left) winning the women's 200 metres in 22.59 seconds at the IAAF World Challenge meet in Rieti, Italy, yesterday. At right is Ezinne Okparaebo of Norway who finished fourth in 23.70.

Thompson outclassed the women's 200 metres field to win in 22.59 seconds. She was well clear of Ukraine's Nataliya Strohova, who took second in 23.40, and third-place Russian Kseniya Ryzhova, 23.54.

"It's a good track," Ogunode told iaaf.org after his run. He added: "Unfortunately, I hurt my hamstring before the World Championships in Beijing. I have respect for Usain Bolt and Justin Gatlin, but I know that I can beat them. I am the future of sprinting."

One of the highlights of yesterday's meet was the women's 800 metres. Francine Niyonsaba of Burundi clocked a fast 1:57.62 to win the event, and dragged the next five finishers under two minutes. Kenya's Faith Kipyegon was second in 1:58.02, third was Olha Lyakhova of Ukraine in 1:58.64. In fourth was Marina Arzamasova of Belarus, 1:58.93, fifth was Angelika Cichocka of Poland in 1:59.55, while Joanna Jozwik, also of Poland, was sixth in 1:59.79.