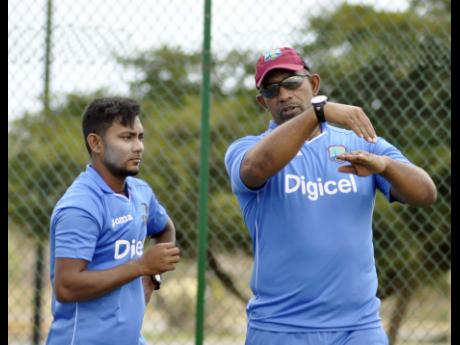 Phil Simmons was yesterday suspended as West Indies head coach for criticising the selection process regarding the one-day team for the upcoming tour of Sri Lanka.

The Trinidadian, only appointed six months ago, made the shocking move of slamming the omission of Kieron Pollard and Dwayne Bravo from the yet-to-be announced ODI squad, claiming there had been "outside interference" in the selection process.

In a statement, the West Indies Cricket Board said it had "learnt of the comments from head coach of the West Indies team Phil Simmons in the print and electronic media which appear to question the legitimacy of the selection process of the one-day international squad for the tour of Sri Lanka".

"As a result, the management of the WICB has taken action to suspend the head coach, pending an investigation into the issue," the release said.

"The head coach will not now travel with the team on the tour of Sri Lanka."

Ironically, one group of West Indies players were scheduled to leave here yesterday for the Test tour of Sri Lanka, with the second group set to depart today.

Eldine Baptiste, who was expected to be the 'selector on tour', will now replace Simmons for the two-Test series which will be followed by the one-day series.

In a media conference at the conclusion of the team-preparation camp last Friday, Simmons took the unusual step of accusing "people" of using their "influence" to determine squad selection.

"I think it's disappointing from the fact that I haven't got the best 50-over ODI squad that we can select in the Caribbean," Simmons said.

No success in meeting

"Unfortunately, when we went into the selection [meeting], we lost it 3-2. Him and myself - the captain (Jason Holder) doesn't have a vote in this - but the captain also gave his views as why they need to be back."

"It is wrong, and I don't like it, and that is my beef with the selection of the ODI team."

Simmons was appointed last March following the ICC Cricket World Cup in Australia and New Zealand, and has overseen home series against England and Australia.