Ardenne rally in the rain 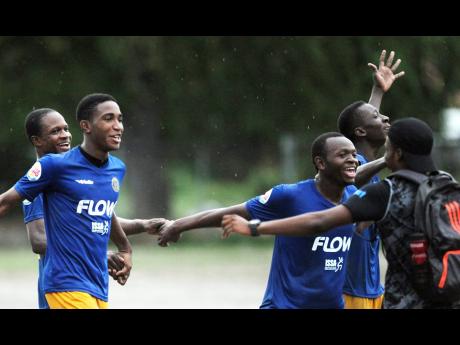 CONDITIONS were wet, muddy and slippery. But that didn't matter to Ardenne High, who were comfortable playing at home and set the contest on fire with a cracking come-from-behind 3-2 win over Kingston Technical High School in ISSA/FLOW Manning Cup football yesterday at Ardenne Road.

The current campaign has ended for Ardenne High, but besides their 1991 triumph, it could well go down as one of their most memorable in recent times, having claimed 15 points from 10 preliminary round games.

Ardenne finished fourth in a group that many would regard as the 'Group of Death' this season, behind current leaders Innswood High (22), many-time winners St George's College (19) and Denham Town High (19) points.

Ardenne's goals were scored by Ronaldo Howard, who headed home from a corner kick in the 12th minute, while Jevone Blair volleyed home a superb strike inside minute 65 from the edge of the penalty box.

Their third goal came from the tried and proven free-kick specialist, Shamar Bennett, who brilliantly finished off from 17 yards out in minute 90.

Kingston Technical led through a finish from Rasheem Gold, who was in the right place at the right time to score after just 11 seconds. He doubled in the 36th minute, to finish off his first and only year in the Manning Cup, in fine style.

Gold is aged 18 and a current fifth former who will not be able to play Manning Cup next year.

Coach Junior Francis was happy with Ardenne's fourth win of the campaign.

"We kept back most of our regular starters. We didn't want to lose the game, so we made some adjustments to the team. We should do well next season as we have only four players leaving. We plan to start our preparations early," he told The Gleaner.

"I see a lot of improvement in the players. We should have won three points today, but that's just how the games goes," he noted.