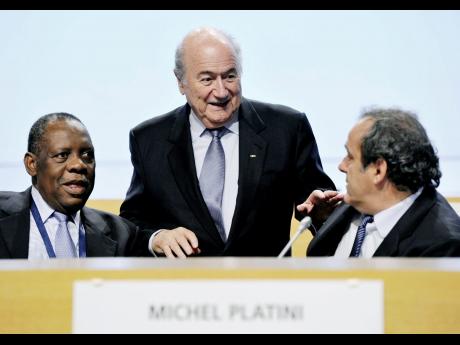 The lack of a written contract and a delay collecting payment led to the 90-day suspensions for Sepp Blatter and Michel Platini, a person familiar with the FIFA ethics case told The Associated Press yesterday.

Blatter and Platini were handed 90-day bans last week after failing to provide written evidence to justify a payment of two million Swiss francs (about $US2 million) that Platini received from FIFA in 2011 - nine years after the job was completed - according to the person. The person spoke on condition of anonymity because he wasn't authorised to speak publicly about the case.

Both Blatter, the FIFA president, and Platini, his counterpart at UEFA, face longer bans if the FIFA ethics committee proves its case to ethics judge Hans-Joachim Eckert. The full verdicts are expected before the 90-day suspensions end.

Both deny wrongdoing and are appealing against their suspensions.

The ethics case was triggered by Blatter and Platini becoming embroiled in a criminal investigation in Switzerland over the same payment. Blatter was questioned as a suspect, and Platini is being investigated by the Swiss attorney general as something between a witness and a suspect.

The payment relates to the time when Platini worked for Blatter as an adviser from 1998 until 2002, when the former France captain joined the FIFA executive committee.

According to the person, there was only a verbal agreement on the additional 500,000 Swiss francs per year - the amount eventually paid in 2011. Under Swiss law, Platini should have called in the debt within five years.

Platini, who was also a FIFA vice-president under Blatter until he was suspended on Thursday, said two weeks ago that he was not paid "the totality of my salary because of FIFA's financial situation at that time".

A statement from the ethics committee's adjudicatory chamber, which is headed by Eckert, said yesterday that it interviewed Platini for more than five hours on October 1. Eckert "did not see a need for a second hearing" before imposing the provisional suspension, the statement added.

UEFA said last week that Platini feels "he has given satisfactory explanations to the authorities that are dealing with this case".

The provisional ban looks set to derail Platini's hopes of standing in the FIFA presidential election, which is scheduled for February 26. But the FIFA executive committee could decide to postpone the ballot when it meets on October 20.

In a separate case, FIFA suspended Thai soccer association president, Worawi Makudi, for 90 days. Details of the case were not provided yesterday, but Worawi has been under investigation for his conduct during the 2018 and 2022 World Cup bidding contests.