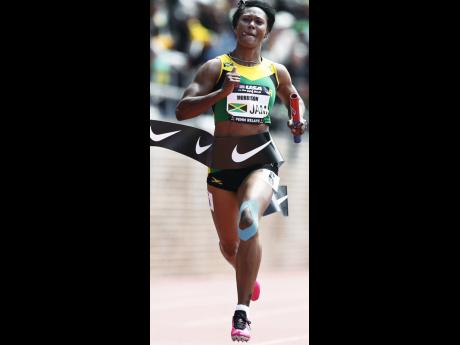 Morrison, a 100m finalist and the lead-off runner on Jamaica's gold medal-winning 4x100m relay team at the recent IAAF World Championships in Beijing, China, was reportedly asked to leave the University of Technology-based MVP Track Club.

There was speculation that she would remain in Jamaica and train with one of the other local outfits, but it has now been confirmed that she will work out of Austin, Texas, with Asafa's older brother, Donovan.

A lot of potential

Spokesperson for the club Tara Playfair-Scott confirmed Morrison's addition to the club, while sharing her impressions of the athlete, whom she considers a perfect complement to the growing group.

"We are thrilled to have her on board. She is an amazing athlete with a lot of potential, and we are looking forward to working with her," Playfair-Scott told The Gleaner yesterday.

"Natasha is a great addition to the Fast Twitch family, and I think she complements the others very well. It's a nice group and a nice mix of athletes," added Playfair-Scott, who also shared that the club is unlikely to make any other additions going into the upcoming season.

The club is completed by another Jamaican sprinter, Winston Barnes.

Morrison, who ran a personal best 10.96 in the semi-finals of the World Championships, finished seventh in the final, with a time of 11.02.

The sprinter, who has struggled somewhat with injuries over the past few seasons, made her breakthrough this season, earlier booking her spot on the World Championships team by finishing second in 11.03 at the National Senior Championships in June.

She is considered by many to be among the island's more promising sprinters but was surprisingly cut from the MVP Track Club shortly after the World Championships, becoming part of an exodus that included fellow world-class athletes Kaliese Spencer and Christine Day, who have since joined the Cameron Blazers unit.