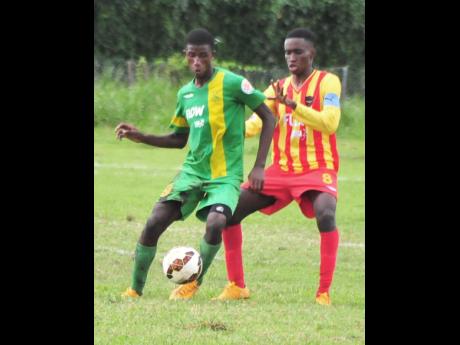 The win secured Peterfield's spot among the eight daCosta Cup Interzone winners in the FLOW Super Cup and eliminated Cornwall.

Over at Jarrett Park, Rusea's found renewed hope with a 7-1 lopsided victory over Herbert Morrison to join Petersfield in the next round of the daCosta Cup.

It was a splendid display from the Westmoreland-based Petersfield, who earned their first ever win over Cornwall College in the daCosta Cup.

Reid struck the opener in the seventh minute, then added his team's second in the 12th and completed his hat-trick in the 34th minute.

Cornwall, who were behind the eight- ball even before kick-off after arriving 20 minutes late for the 3 p.m. start, found some solace in attack when Peter-Lee Vassell found the net in the 22nd minute to cut the lead in half at 2-1.

But a 3-1 deficit at half-time was always going to prove a challenge in the slippery underfoot conditions at the venue.

Eight minutes into the second half, Donovon Brown struck a sweet free kick with venom into the Cornwall goal from 35 yards out to push his team into a 4-1 lead.

Cornwall then got 59th-minute goal from Giovanni Reid, but then received a severe setback. Stephen Hylton, a key Cornwall College defender, was shown a straight red card in the 83rd minute for stomping on a Petersfield player.

Playing a man short, however, Cornwall showed some amount of determination to reduce the deficit. Alrick Ottey this time netted in the 93rd minute, but it was a little too late to save their season.

"We finally get one over Cornwall, and it is sweet," said Petersfield's assistant coach Dwayne Forrester.

"The finishing was great today. We conceded three but managed to outscore them and earn a place in the Super Cup. Reaching the last 16 of the daCosta Cup is more important, but we will take it one game at a time," he declared.