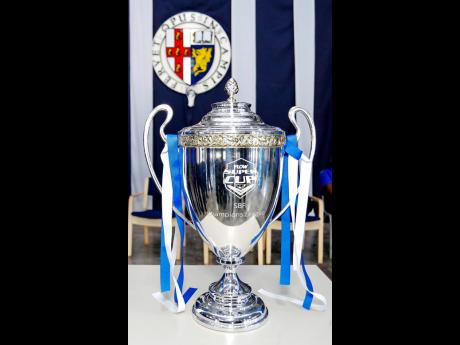 JC, which earlier this week suffered a penalty shoot-out loss to Wolmer's Boys in the ISSA-FLOW Walker Cup competition, will be looking to ensure that they take better care of one of the three titles that they won last season along with the Manning Cup and Olivier Shield competitions, and will face a motivated Vere Technical at the National Stadium tomorrow at 6 p.m.

DaCosta Cup champions Clarendon College were eliminated on penalties by last year's beaten FLOW Super Cup finalists Holy Trinity in the first round of the competition and they will be desperate to have a bigger impact in the competition this year, when they play Hydel in the first of three games at Sabina Park at 2 p.m.

Also at Sabina Park, Walker Cup finalists Wolmer's Boys - semi-finalists last year - will play Port Antonio High at 4 p.m. with St George's College, who also booked their spot in the Walker Cup final, will take their first stride in the tournament when they play Petersfield in the curtain-closer at 6 p.m.

The second instalment of the FLOW Super Cup is being contested by 16 teams - eight each from the Manning and daCosta Cup competitions, with a $1-million jackpot and a new Italian-crafted trophy awaiting the eventual winners.

Each team will get $25,000 for contesting the first round, and an additional $50,000 for advancing to the quarter-finals, with the four semi-finalists each set to receive another $100,000.

The draw for this year's FLOW Super Cup took place at the Creative Production and Training Centre yesterday.