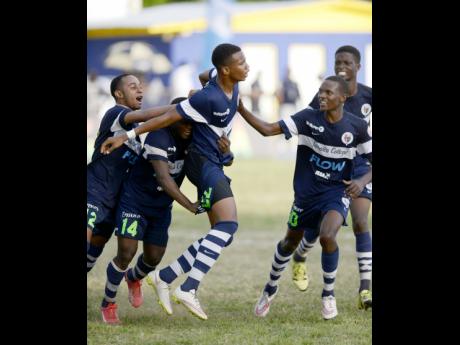 They now join Denham Town and Jonathan Grant in the last four.

Wolmer's, who needed only a point to claim top spot, had only themselves to blame as they wasted a number of easy-scoring opportunities in the first half.

Zeron Sewell fired the 'Dark Blues' in front from the penalty spot at the 52nd minute, after Chevaun Crooks was fouled inside the area.

However, minutes earlier, Wolmer's wasted the best opportunity of the game when Rivaldo English slipped through the JC defence, but hit his shot on to the goalpost. However, the ball fell kindly to Alphanso Gooden who had an empty goal at his mercy, but he slammed the ball against the same goalpost, before the rebound was cleared by a defender.

Tyreek Magee made it 2-0 four minutes after Sewell's opener, when his free kick caught Shawn Jemison flat-footed and bounced inside the far post.

Wolmer's were given a lifeline in the 61st minute when the Heroes' Circle-based school received a penalty and Rojay Smith made no mistake from the spot.

However, the champions restored their two-goal cushion when Donovan Segree played in Malik Howell, who slotted past Jemison from close range.

"Wolmer's and JC have a big rivalry from long years ago, and as the defending champions we wanted the opportunity to defend our title and to do that we have to move to the next stage, which is the semi-finals," he said.

"We should have gotten one or two goals first half, but we were in the game at the end of the first half. But we didn't recover from that penalty and the second goal caught us thinking about that and we got agitated and lost our composure," he said.

In the first game, which was purely of academic interest, Holy Trinity High beat Vauxhall High 2-1 on goals from Jabari Howell (11th) and Keno Chance (42nd). Jordan Batson had given Vauxhall a two-minute lead.

The last semi-finalist will be decided this afternoon.

Both matches start at 3 p.m.