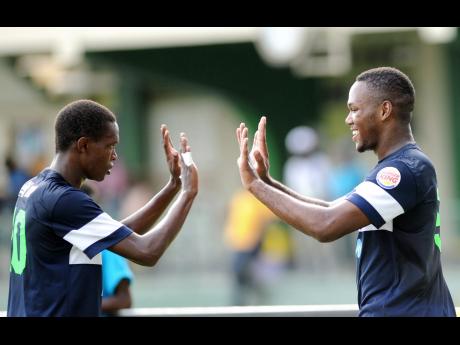 The depth and mettle of reigning ISSA-FLOW Manning Cup champions, Jamaica College, was too strong for Denham Town High, who they turned back 4-2 at Sabina Park yesterday en route to their third consecutive final.

In the later semi-final at the same venue, St George's College cruised to a 4-1 triumph over Jonathan Grant High to set up another titanic schoolboy football final between JC and St George's, to be held inside the National Stadium next Saturday.

A first half hat-trick from Alex Marshall ensured his team's passage to the final for the first time since 2012. The forward has now scored 26 goals. Dominic James scored the Light Blues' fourth in the 86th minute. Mario Desouza scored Jonathan Grant's consolation.

Meanwhile, JC were led by a match-winning brace from Donovan Dawkins, who opened the scoring inside three minutes before adding an exquisite second with a low shot into the far left-hand corner in minute 18, which left goalkeeper Brian Bennett rooted to the spot.

Khori Edmond struck home a powerful 51st-minute volley despite being surrounded by a crowd of Denham Town bodies, while Ajeanie Talbot's 90th-minute stinger put the game out of reach.

"I feel good to score. My coach said I have to go out there and score goals, it's time, so I am happy. I believe I can repeat in the final," the forward told The Sunday Gleaner following his side's win.

For Denham Town, Patrick Edwards profited from a penetrative ball played over the top and into the JC box to which he applied a side-footed finish for his team's first goal in minute 22, while Olando Brown caught out JC's goalkeeper, Jahmali Waite, and toe-poked past him in minute 73.

JC's head coach, Miguel Coley, said: "I'm happy that we won, happy that we were able to score four goals, it's very good. But defensively, we have one week to work with them in training and prepare them.

"It's gonna be a lot of intense preparation and hard work. Definitely, we can retain our title, it's just to work on some details," Coley added.

"It was a spirited performance by my team," said Denham Town's head coach, Omar Edwards, who blamed the loss on their failure to successfully play the offside trap.