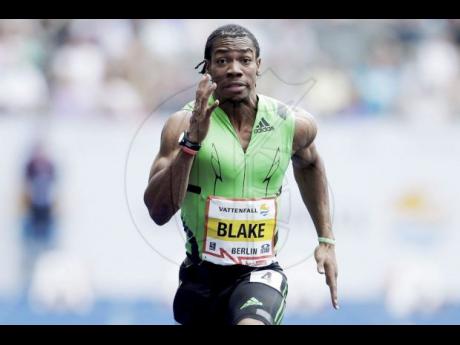 On a day when American Justin Gatlin dropped a wind-aided 9.90 seconds run in The Bahamas, 2011 World 100m champion Yohan Blake signalled his return after injury issues, with a world leading 9.95 (+1.4) win in the 100m at the MVP Track and field meet at the National Stadium on Saturday night.

Blake, who has been bothered with hamstring injuries, which caused him to miss the 2013 World Championships and much of the subsequent seasons, confirmed whispers out of his training camp, which pointed to an athlete in good shape, after bursting out of the blocks and out-sprinting a solid field.

Earlier, Gatlin, while competing at the Chris Brown Bahamas Invitational at the Thomas A Robinson Stadium in Nassau, stopped the clock in 9.90 seconds but had an illegal +2.3 wind pushing him along.

Qatar's Femi Ogundoe, was second in 9.94 with Trinidad and Tobago's Adrian Griffith taking third in 10.03.

Also in The Bahamas, veteran Jamaican sprinter Veronica Campbell-Brown had to settle for third place in the women's 100m, 11.17 in a  tight finish behind Trinidadian Michelle-Lee Ahye, 11.14 and Murielle Ahoure (Ivory Coast), 11.17.

Another Jamaican Aleen Bailey fell during the early stages of the race and was reportedly taken to hospital after hitting her head on the track.

Quarter-miler LaShawn Merritt was a highlight at the meet, stopping the clock in a brilliant 19.78 (+0.9) to win the 200m event. Wallace Spearmon, 20.40 was next best with Mike Rodgers 20.42 finishing third, while Jamaica's Jason Livermore was fifth in 21.01.