Tony Becca | Where is Brandon King? 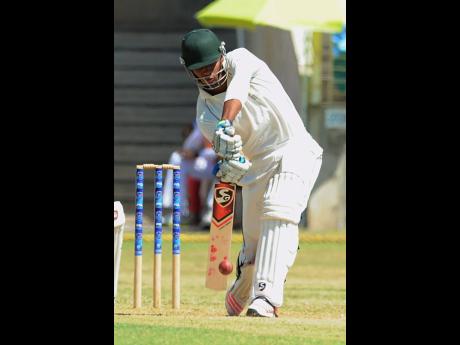 And from those days until now, I have never seen a Jamaica team bat so poorly, or a Jamaica team of such poor batsmen, like those of the past two or three years.

I have also travelled the world of cricket and I have seldom witnessed such poor batting, be it at the first-class or the Test-match level.

Mostly, however, I have seen it happen because of poor batting, the kind of batting where good technique is missing, and where playing back and playing forward, playing with a straight bat, knowing when to attack and when to defend, knowing when to cut, and when to sweep are normally foreign things.

A batsman like John Campbell is the exception, and each time I see Jamaica collapse recently, and to bowling of average standard and on relatively good pitches, I wonder what has happened to Jamaica's batting.

Most times, however, I wonder what has happened to young promising batsmen, and especially to Brandon King.

He is a former Jamaica Under-19 and West Indies Under-19 player, he is the captain of Kingston Cricket Club, and he will be, in another week or two, only 22 years old.

He is at the age when most good cricketers start their international careers, and although he did likewise last year, it was only a false start, or so it appears.

After getting into the national team last year against Trinidad and Tobago, and making an impressive 71 in his second match, he was unceremoniously dropped, and after a couple of matches, and only brought back for the odd match here and there.

He has played seven times for Jamaica, he has had no resting place in the batting order, he has scored 285 runs, and he has averaged only 21.92.

King, however, is better than those figures suggest he is. He should bat near the top of the order and not up and down the order. He deserves to be treated better by the selectors and the captain.

Two seasons ago, on a Sunday at Sabina Park, he took on a Jamaica Defence Force team with their three fast bowlers, including Sheldon Cottrell and Reynard Leveridge, and he gave them a proper caning.

He was hit on the head by Cottrell early in the innings before he stood tall and played a real masterpiece of an innings.

Kingston needed quick runs to try and win the Senior Cup after trailing on first innings, and he went at the bowling.

He went to bat at 15 for one, he scored 92 with six sixes and five fours, he was dismissed at 167 for two, and the fans, on either side, were thrilled by his composure at the wickets, and by his stroke play.

It was a classy innings. He demonstrated the stuff of which great batsmen are made. He destroyed the bowlers, including the spin bowler, with lovely, fluent drives, some of them ending in the stands behind the boundary at long-off and long-on.

King, on that day, and many days after, in the Senior Cup season and in this year's Trial matches, during which he made the most runs, including a brilliant century, showed his class.

His technique is good, and pleasing to the eye. His style is good, he has the stamp of a future West Indies batsman, and he should be treated as such.

On top of that, his runs, his number of centuries, his top score, and his average for the recent season were far above every other player.

In the three Trial matches a few weeks ago, King scored 223 runs, he had a top score of 155, and finished with an average of 74.33, all above his contemporaries.

He has class and that should be obvious to the selectors. He deserves a run, no question about that. The fans know it, and so should the selectors.

Each day I go to Sabina Park, I hear the fans asking one question: Where is young King? Where is Brandon King?

The selectors deserve credit for calling up all-rounder Fabian Allen, no doubt about that, and although they dropped him after a few good games and after a few poor ones, also for the selection of fast bowler Marquino Mindley, who is also a good and promising one.

King may not reach the heights that others have done, and he may not be really as good as some of us may think, but he deserves the chance to really parade his skills, and because he promises so much, he deserves more than just a chance.

Remember Lawrence Rowe, or one like Jeffrey Dujon, and another like Jimmy Adams? King also does not need to score an abundance of runs to prove that he is good, or that he can go further than being a good Senior Cup batsman.

Unlike Cleveland Davidson, or Colin Fletcher, he does not need a bagful of runs to prove that he can bat, and that he possesses the pedigree to bat well.

On top of parading the class, King made the runs, he has been through the process, and he deserves a good run in the Jamaica team, especially in a weak Jamaica batting team, so that the fans can stop shouting his name and asking the question: Where is young King? Where is Brandon King?