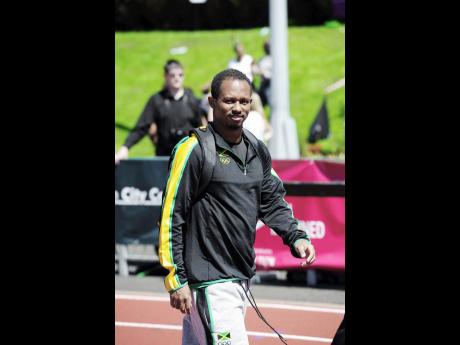 Olympic gold medallist Michael Frater was watching keenly from the stands when his Racers teammates won the men's 4x100m at last Saturday's Gibson-McCook Relays. Speaking just after the race, Frater said that the run of 38.59 seconds was good for this stage of the season. He believes that there is more to come.

Jason Rogers of St Kitts and Nevis, Britain's Zharnel Hughes, and the Jamaican pair of Jevaughn Minzie and Yohan Blake combined to win the early season contest. Their win pleased Frater. "They didn't look too bad out there at all," was his initial view. "Just started some relay work this week, so I think they're a bit rusty, but Zharnel Hughes and Yohan look very good on either straight," he said. "It was a quick team put together," he noted, "and to run 38.5 in February is not too bad."

Told that Blake's anchor leg was timed in 9.2 seconds, Frater indicated that his 2012 Olympic 4x100 gold medal-winning teammate will get faster. "Speed work hasn't started yet, and he looked very strong, but that's good enough for right now."

He had high praise for his young Racers Track Club colleague Minzie. "I think he got a taste of glory last year," Frater said of the 21-year-old who ran the 4x100 heats at the Olympics last year. "And it has really motivated him, so he's doing tremendous work out there, putting in the hard work and it's just for him to stick to the plan the coach has for him and it will pay off for him."

Frater outlined why he was in the stands and not on the track himself. "I took some time off to go to Australia, so I missed some training there. This is a very important year for me, so I have some work to put in for the next month or two", he said of his trip Down Under for the innovative Nitro Team Athletics Series.

The climax of the 2017 season will be the World Championships, which start in London on August 2. When Frater was there in 2012 as part of his third Olympic team, he helped Jamaica to set a 4x100m world record.

Frater may call it a day