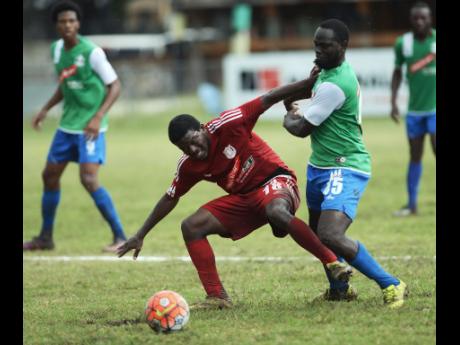 Boys' Town have made the bottom place in the Red Stripe Premier league their own all season and many have pronounced them dead, while others have gone a step further by closing the coffin of relegation on them. The Red Brigade, as they were known in their heyday, were notorious fighters, and they will need to summon those qualities and add to that some consistency if they are to survive.

Their coach, Andrew Price, is of the view that talks of relegation are premature.

"My personal view is that we will survive. We have seven games to go and it is my view that if we win four of them, we will still be in the league next season," said Price, adding that most of those games will be against teams in the lower half of the table and once his team gets the better of those closest to his, they will be out of the danger zone.

Today's game, he said, is probably their biggest of the season.

"It is a big, big game. I told my players that this is probably our biggest game of the season. We have to leave the Wembley Centre of Excellence with three points, and that is our objective.

Today will be a test of that when they play away to 10th-placed and fellow relegation battlers Jamalco in one of five games on today. They showed quality to lift themselves up from a 4-0 hammering at the hands of a ruthless Portmore United on Monday night to draw 0-0 with leaders UWI, who themselves were coming off a 4-0 hammering of Tivoli Gardens. Boys' Town also managed to register a recent 2-1 away win over Harbour View, but have not managed to register a series of positive results.

A win for Boys' Town, now on 20 points, would elevate them to three points behind Jamalco and one behind Maverley-Hughenden if the form book plays true, as the latter are expected to fall to Tivoli Gardens. Another positive for Boys' Town is that they have a game in hand.

Jamalco have registered just one win in their last five games for a total of three points, but of note is the fact that that win was achieved at their home ground - a good sign for them. Boys' Town only went a point better as they had three losses, one win and a draw.

As for Maverley-Hughenden, they will be going up against Tivoli Gardens at the wrong time.

The Omar Edwards-coached and Jermaine 'Teddy' Johnson-inspired team is still smarting from the 0-4 whipping they suffered at the hands of leaders UWI. With designs of getting into the semi-finals and even winning the title still very much in their minds, no further slips can be afforded.

Waterhouse and Harbour View are more comfortable than the trio of Boys' Town, Maverley-Hughenden and Jamalco, but they cannot afford to take anything for granted as they are not yet out of the woods. Of them, Waterhouse are the only team not to have lost in their last five games, but sit just four points above the relegation zone. Harbour View have found themselves back on the losing trail - dropping four in a row of their last five. Today's away game to Waterhouse could be a statement game for them.

At the other end of the table, leaders UWI will seek to get the better of Reno as they look to confirm their place in the championship play-off stage. Reno, on the other hand, with two games in hand are still eyeing that sixth-position despite being 10 points off Arnett Gardens.