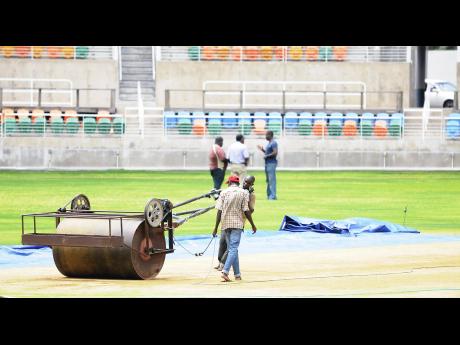 Antigua and Barbuda Cricket Association president, Leon Rodney, has criticised the Sabina Park pitch and called on the

West Indies Cricket Board to pay closer attention to the preparation of pitches for the ongoing Regional four-day championship.

His calls come after Leeward Islands Hurricanes beat Jamaica Scorpions by 34 runs at the venue in a low-scoring affair that ended on the third day, despite the abandonment of the first day due to rain.

Both teams were dismissed below 100 in their first innings, with Hurricanes managing 133 in their second innings, and Scorpions falling for 114 in pursuit of 149 for victory in the last innings of the day-night fixture.

"If our first-class competition is going to operate like that, then the West Indies Cricket Board [has] to look into the preparation of the grounds, especially in Jamaica," said Rodney, a former Leeward Islands coach.

"There are just too many issues of that happening in Jamaica for us not to be concerned, and maybe the West Indies Cricket Board needs to give a special eye.

All told, a mere 374 runs were scored across four innings, with only 12 double-figure scores registered, and a highest score of 47 by Test batsman Jermaine Blackwood in the Scorpions second innings.

Rodney said based on Sabina's recent history, there were obviously issues with the pitch which needed to be addressed.

"When I was coaching Leeward Islands in 2010, as a matter of a fact, we had two games stopped in Jamaica and the pitch had to be reorganised," he said.

"And one was against Guyana, in Sabina, and then the England Test match that was stopped, so when I saw these figures, I was saying that something has to be wrong."

The second-round game at Sabina Park involving Windward Islands Volcanoes was also a low-scoring affair, but the second- and third-round games both saw totals of above 200 in every completed innings.