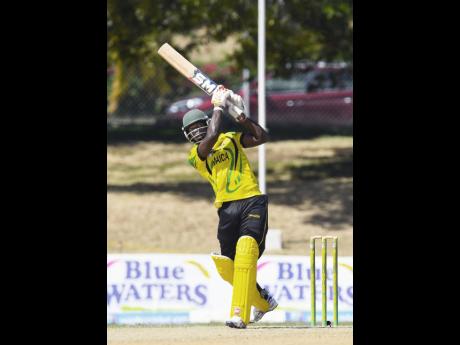 Not even a stunning half-century from rookie Fabian Allen could prevent Jamaica Scorpions from a sudden collapse, as they crashed to a 26-run defeat to Barbados Pride in their final match of the Regional four-day championship here yesterday.

Starting the final day at Kensington Oval on 114 for one in pursuit of 341 for victory, Scorpions were dismissed for 314, in the second session, after suffering a swift lower order meltdown.

Chadwick Walton, unbeaten on 70 overnight, made 93 while Trevon Griffith, who started the day on 25, made 53.

Allen, in only his fourth first class game, smashed an entertaining 60 off 35 deliveries and Test batsman Jermaine Blackwood chimed in with 44.

Scorpions reached lunch on 241 for five - with another 100 runs required in the final two sessions of the contest.

But Test left-arm spinner Jomel Warrican claimed five for 87 and veteran spinner Sulieman Benn, also a left-armer, picked up three for 90, as Scorpions lost their last five wickets for 73 runs.

The defeat for Scorpions was their fifth of the campaign and their fourth in five outings in the latter half of the competition, after leading at the mid-season break.

Starting the day in control of the run chase, Walton and Griffith extended their second wicket stand to 137 before being separated.

Scorpions were increasing their stranglehold on the game when Griffith swung Warrican to Ashley Nurse at mid-on at 162 for two. Just inside the hour mark, Walton perished with his fifth first class century in sight, superbly taken at short leg by Kyle Corbin off off-spinner Kenroy Williams.

All told, Walton faced 181 deliveries in a shade over 3-1/4 hours at the crease and counted seven fours and four sixes.