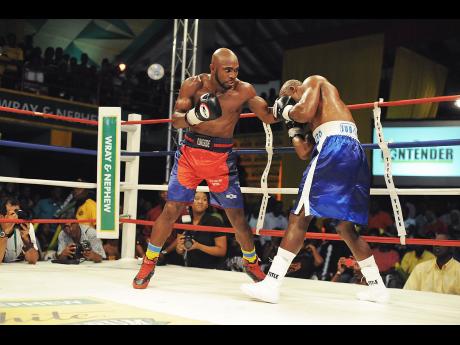 File
Tsetsi 'Lights Out' Davis (left) in action against Ramel 'Sub Zero' Lewis during a semi-final round encounter of the Wray & Nephew Contender boxing series in 2013.

Wray and Nephew Contender crowd favourite, Tsetsi "Lights Out" Davis, makes his 2017 debut in the competition tonight, against Canadian David Leblond, at the Chinese Benevolent Association auditorium, in a fight, that on paper, looks like a mismatch. The night's action starts at 8.30 p.m. with two amateur bouts, and the main event, which will be broadcast live by Television Jamaica, goes on at 9.30.

Davis has appeared in every Contender series since its inception in 2013 and has reached the finals twice. He lost to Devon Moncriffe in 2013 and to Sakima Mullings in 2014. Last year he bowed out early when a clash of heads in his encounter with Richard Holmes senthim packing with a serious cut over his right eye.

"This is my year," he told The Gleaner yesterday. "I have trained hard, I am ready and I plan to go all the way" was his bold prediction. He is one of the seeded boxers in the competition, and had what was seen as the luck of the draw in the first round of the competition, when he picked Leblond's name at the pre-fight draw. Leblond, who is a brash 23-year old boxer, has had only one fight as a professional, but his camp points to the fact that he learnt his skills as an amateur.

"Do not pay any attention to his record," was the word from his camp yesterday" as he put some finishing touches on his training.

"We are here to win and we know who we will be fighting. We have studied tapes of Davis in action, and have noted some weaknesses that we

intend to exploit. We are the underdogs and that is fair, but we have a plan of action, and there will be a big upset tomorrow night," was the final word. In the first fight on the series, Jamaica's Sakima Mullings fought Winston Matthews, a Canadian with only one win and two draws, and the feeling was that he would have had an easy passage. He was pushed all the way however, and ended up with a close decision. Will history repeat itself? We will certainly know tonight. In the meantime, Davis has been posted as the firm pre-fight favourite.