Everything is supersized in big heavyweight title fight 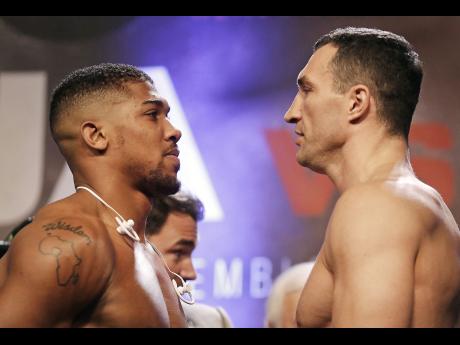 Anthony Joshua and Wladimir Klitschko drew the kind of crowd for their final news conference that most fighters would be happy with once they got in the ring.

Everything is supersized in their heavyweight title fight, including the fighters themselves. Both stand at 6 feet six inches.

The two big - and big-punching - heavyweights meet tonight in England's national stadium, where some 90,000 fans are expected to watch the most anticipated heavyweight fight in more than a decade. Most will be screaming for Joshua, but the loudest voice may be that of Klitschko's brother, Vitali, in his corner.

"My prediction is that Wladimir will knock him out," said Vitali Klitschko, a former three-time heavyweight champion himself who is now the mayor of Kiev in his native Ukraine.

And, of course, he enters it seen as a villain by English fans who are hoping for Joshua to have the kind of heavyweight reign Klitschko has enjoyed - if not even better.

Joshua's popularity in his native country was evident on Thursday at the news conference in the Sky Sports building, where hundreds of employees left their desks to line the balconies and stairwells to get a glimpse of the two fighters. The fight quickly sold out Wembley Stadium when announced and will be on pay-per-view in England as well as both HBO and Showtime in the United States.

It comes at a time when the heavyweight division is suddenly attractive again, with American Deontay Wilder holding part of the title and Joshua owning another piece.

Joshua, who seemingly came from nowhere to win the gold medal at the 2012 Olympics, is a powerful puncher who has knocked out all 18 of his opponents but has yet to face anyone near the calibre of Klitschko.

Klitschko will be fighting for the heavyweight title for the 29th time, a remarkable feat all by itself. With his brother, Vitali, he has dominated heavyweight boxing for the last decade, much to the displeasure of many avid boxing fans who don't like his conservative style.

But he has vowed to change his ways and be aggressive against Joshua, knowing that at age 41, this very well could be his last hurrah. The fact that Klitschko got the fight at all had a lot to do with his poor performance in losing the title by decision to Fury.

"I think Father Time is a terrible person when he shows up," said Joshua's trainer, Rob McCracken. "And he's already shown up."

"It's just me and another man coming to blows, and the best man will win," the 27-year-old Joshua said. "April 29 is just another stepping stone to greatness."

Joshua is a former sparring partner for Klitschko, who used him in 2014 when Joshua had only seven pro fights. Klitschko said the two know each other well after working together for about 20 rounds.

Until watching Joshua at a public training session on Wednesday, though, Klitschko saw something different.

"I have never seen AJ as big as he is now," he said. "He's as big as Arnold Schwarzenegger."