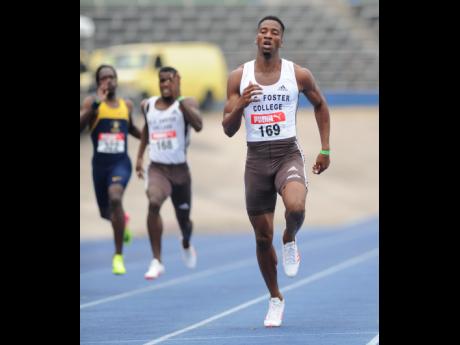 Demish Gaye delighted a small band of devoted track and field fans at the first JAAA All Comers meet with a winning 400m run of 44.85 seconds inside the National Stadium on Saturday. Gaye, the two-time Inter-Collegiate champion, broke through the 45 second barrier for the first time. The G.C. Foster College student-athlete indicated that the run is the result of his training which he says is going very well.

The time lowered his personal best from 45.24 seconds, and is the fastest time by a Jamaican this year.

"That gives me a lot of confidence," he said of his performance.

Running strongly from the start, Gaye resisted the mid-race surge of national champion Javon Francis to win. Speaking breathlessly after the race, he said: "Training has been going well and I'm healthy right now, and I just want to keep it that way for the rest of the season."

That was a reference to last season when an ill-timed bout of the Zika virus ruined his Olympic campaign.

Francis, who emerged from the recent IAAF World Relays with an injury niggle, was timed in 46.52 seconds.

The win has brightened Gaye's outlook for this season. "Well, I'm looking forward to the World Championships, World University Games," he quietly projected. "Just want to go to the Trials and make my mark there."

Weakened by Zika, he was eliminated in the semi-finals at the Trials, also known at the National Senior Championships, last year.

Junelle Bromfield, the University of Technology star, followed up her recent Carifta Games 400m win with a season's best time of 52.37 seconds, to edge Anastasia Le-Roy in the women's equivalent. In other highlights, Olympic and World 400m bronze medal winner Shericka Jackson turned up for some speed work and set a personal best of 11.24 seconds in the 100m. O'Dayne Richards, Jackson's MVP Track Club teammate and fellow World bronze medallist, extended his best shot put distance of 2017 to 20.74m.