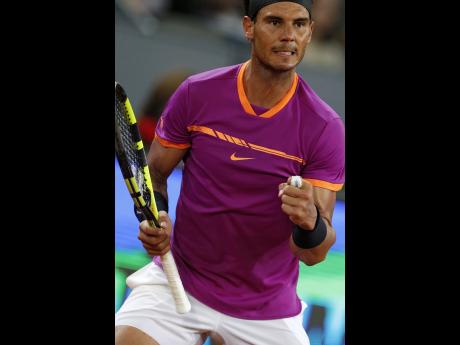 In a meeting between the players with the most match wins this year, Nadal saved all five break points he faced against the 10th-ranked Belgian, and converted his chances in the second set to win his 13th straight match.

Nadal's tour-leading 32nd victory set up a semifinal against defending champion Novak Djokovic, who advanced when Kei Nishikori withdrew before their match because of a wrist injury.

On the women's side, defending champion Simone Halep of Romania cruised past Anastasija Sevastova of Latvia 6-2, 6-3 to reach her third Madrid Open final. The third-seeded Halep, who also lost the 2014 final to Maria Sharapova, will play to keep her title against eighth-seeded Svetlana Kuznetsova of Russia or Kristina Mladenovic of France.

Goffin, who has 27 victories, was trying to make it to his third final this season.

He saved all six break opportunities he conceded to Nadal in the first set, but the fifth-ranked Spaniard took control of the tiebreaker under the closed roof on centre court.

Nadal, a four-time champion in Madrid, had an easier time in the second set after earning an early break, and closed out the match with another at the end.

"We had to hit very close to the line to win the points," said Nadal, who is trying to win his third consecutive title after victories in Monte Carlo and Barcelona.

In another quarterfinal, Pablo Cuevas of Uruguay rallied to beat Alexander Zverev of Germany 3-6, 6-0, 6-4. Cuevas won one of the points of the tournament with a no-look winner with his back to the court after a lob shot by Zverev early in the second set.

The sixth-seeded Nishikori withdrew saying his wrist was "not 100 per cent" and he didn't "want to risk" a more serious injury.

Djokovic hasn't played in the semifinals of any event since winning the title in Doha at the beginning of the year. He lost to Goffin in the quarterfinals in Monte Carlo, his first clay tournament of the season.