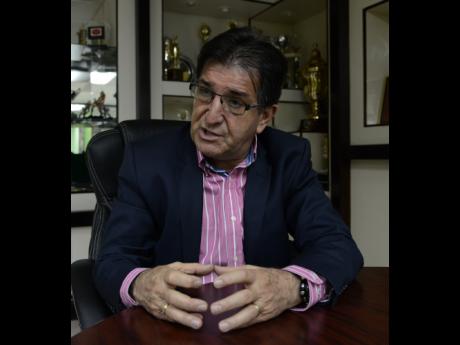 The man known to Jamaicans affectionately as Professor Rene Simoes breezed through Jamaica last week celebrating his 41st wedding anniversary in the land he calls his second home. I was privileged enough to interact with RenÈ for two full hours on the top morning radio show Sports Explosion on HITZ 92 FM.

As the conversation flowed with the pint-size Brazilian, so did the nostalgic memories of almost 20 years ago, when Simies plotted and piloted Jamaica's Reggae Boyz to that historic World Cup qualification for France 1998.

Since that magical evening on November 16, 1997 inside the National Stadium when the dream actually became a reality, through the ensuing months leading into the finals in the summer of 1998, our football has never been able to get back to that euphoric and elusive high. Rene Simoes eventually left, subsequently returned for second stint, but that initial magic was never ever rediscovered.

Our conversational journey into the past zoomed specifically in on the 1998 run, and as Simies eloquently addressed some of the intricate issues and questions almost two decades on, it became more and more evident to me, how much his leadership, his clarity of thought, and direction were missed by local football.

Simoes's vision and undaunted belief in Jamaicans generally, and especially in the talent and ability of our footballers, were startling. These are qualities that have seemingly disappeared from our football since his initial departure.

He recounted vividly the uphill task he faced on his arrival here in 1994 with many Jamaicans thinking and expressing at the time that he was crazy for even harbouring thoughts of qualifying the Reggae Boyz for France a mere four years later. Simies was never daunted by this.

Reliving this experience in the presence of the central figure in that historic achievement ignited the bitter reality that the widespread belief and the confidence in our football left on that plane back to Brazil with Simoes in 2000. The total non-belief in the local-born players, and the converse over reliance on half-competent, half committed foreign born players was a grave mistake that set back the development of an entire generation of Jamaican players.

The coach-turned-coaching consultant, author, and philosopher, while cognisant of the fact that the Jamaican football landscape had changed, explained that certain fundamentals of development cannot change in recommending that Jamaica begin the developmental cycle by assembling a national Under-14 core and build on it going forward.

The intermittent reminders kept coming, of the need for the nation to continue to believe in the vision. Simies had been in Jamaica for one day prior to our exchange, and already he had visited one Under-14 training session, which he said confirmed his belief that there is still talent in Jamaica, and that the challenge remains the development and management of that talent.

The name Ricardo 'Bibi' Gardner represented another pivotal moment in our discussion. Simoes explained that he saw certain characteristics in the then young and inexperienced Gardner, which led to him being taken out of relative obscurity and thrust into the national senior team by Simoes. The rest, they say, is history. Instructively, no more Bibi Gardners have since been discovered.

Pardon my disjointed, emotional thoughts, but Rene Simoes' return has had the net effect of totally disturbing my equilibrium upon realising how much Jamaica's football has missed him.