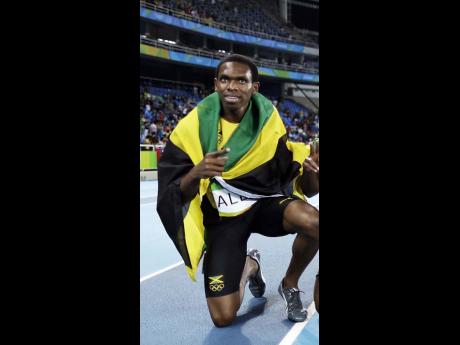 Nathon Allen has edged ahead of Davian Clarke as the athlete with the fastest 4x400 metre leg ever by a Jamaican. Running at the South-Eastern Conference Outdoor Championships in Columbia, South Carolina, Allen anchored Auburn University to second in the 4x400 final in 43.5 seconds. That matched past performances by Clarke and Javon Francis and Allen himself.

However, Allen was timed electronically in 43.48 seconds.

Clarke and Francis ran their 43.5 relay carries in the finals of the 1997 and 2015 World Championships respectively, while Allen produced his first 43.5 in the relay heats at last year's Olympic Games. Based on electronic timing, Clarke had the edge at 43.51, while Francis and Allen had matching 43.52 second legs.

Allen's fast run came after he and Auburn teammate Akeem Bloomfield set personal bests in the flat 400. Beaten by American Fred Kerley, Allen and Bloomfield nevertheless sprinted to times of 44.52 and 44.81 seconds to take the silver and bronze medals.

The time by Allen elevated him to number 6 on the all-time Jamaica 400 metre performance list behind Rusheen McDonald, Jermaine Gonzales, Roxbert Martin, Bert Cameron and Francis.

As a St Jago High School student-athlete, Allen was runner-up in the Class 1 400 metres at the 2015 staging of Boys and Girls' Championships. In that race, he logged a personal best of 45.30 seconds in pursuit of Bloomfield, then of Kingston College. Bloomfield broke Francis' one-year-old Boys' Championships record of 45.00 with an outstanding time of 44.93 seconds. That was his lifetime best until his fine performance at the South-Eastern Conference meet.