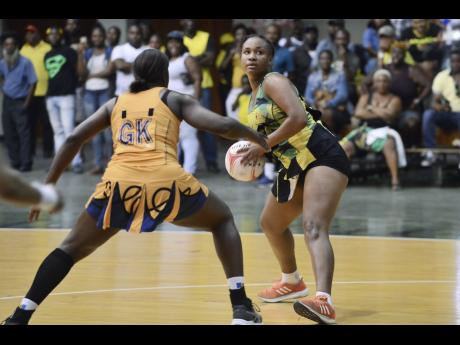 Ricardo Makyn
Shonette Azore-Bruce of Barbados (left) looks on at Jamaica's Thristina Harwood in their second of three tests at the National Arena, yesterday. Jamaica won 40-34.

Jermaine Allison-McCracken registered her first win as head coach of the Sunshine Girls, beating Barbados 40-34 in Game Two of their best-of-three Test series to take a 1-0 lead at the National Arena last night.

"It was really important to get this first win, and we knew we could do it," she said.

Despite the win, Allison-McCracken was far from impressed with the girls' display. "There is still so much to work on the basic footwork, bad passes, so we are going to have to work even harder from now on," she added.

"The Sunshine Girls started slowly against a Barbados side playing with confidence. But the locals soon established a lead in the first quarter, and some excellent shooting from Thristina Harwood ensured the Girls held the lead 12-9 after the first quarter.

The second quarter started scrappily, with both teams struggling to keep possession, and to string passes together, but eventually the Jamaicans got their game going and pulled away to lead 18-12 with little over five minutes remaining.

However, the Barbadians came storming back in the last three minutes of the period, and closed the gap to four points, with the score reading 22-18 going into the half-time break.

A number of changes in the third quarter saw the Jamaicans making consistent mistakes. Poor shooting from Shimona Nelson prevented Jamaica from mounting a respectable lead over their opponents. Barbados continued to push the hosts, but a strong finish from the Sunshine Girls saw them holding their biggest advantage at the interval, as they led the Barbadians 30-25, going into the last stanza.

For most of the last quarter, the Girls maintained their six-point lead, with Harwood returning to lead the attack after some faulty shooting from Nelson in the third.

However, it made little difference as Jamaica kept their lead going into the final minute, but three quick goals in the last minute saw the Jamaicans pulling away to take the match 40-34, much to the delight of the home fans.

The Jamaicans' win follows a 44-all draw in the series opener on Friday.

The teams will meet again in the series decider this evening.