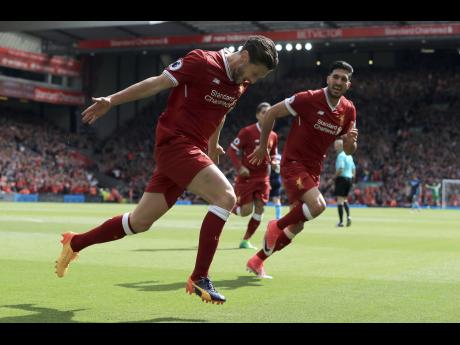 With half-time approaching and the atmosphere inside Anfield getting increasingly tense, a chant drifted across from the away supporters: "Champions League, you're having a laugh."

Liverpool was being held 0-0 by already relegated Middlesbrough on the final day of the English Premier League and was in real danger of throwing away a top-four spot that the team had held for most of the season.

Georginio Wijnaldum proved to be the man for the big occasion once again.

The Netherlands midfielder pierced Middlesbrough's packed defence and drove a rising shot into the net in first-half injury time, before Philippe Coutinho and Adam Lallana added further goals in a 3-0 win.

It sealed a fourth-place finish for Liverpool and a place in the qualifying stages of next season's UEFA Champions League.

The prestigious competition is in touching distance for one of the continent's most storied clubs, a five-time European champion.

"It's the best tournament in Europe," Liverpool manager Juergen Klopp said. "There's nothing better, maybe, in the world. You want to be there. Liverpool needs to be there consistently."

Liverpool will need to win a two-legged play-off in August to play in the UEFA Champions League for only the second time in eight seasons, since American-run Fenway Sports Group bought the club in 2010.

It's quite an achievement for a club that almost broke even in the last offseason while all of its rivals were spending heavily. Liverpool, with 76 points, finished higher in the standings than Arsenal and Manchester United, and only two points behind third-placed Manchester City.

"Everything feels good at this club at the moment," Klopp said. "We deserve this position. 76 points is an outstanding number."