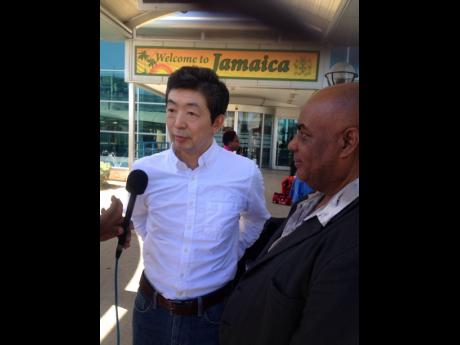 New national table tennis coach Satoshi Takashima says young Jamaican players need to train harder to improve their footwork and also need to gain overseas experience. Takashima has made these observations during his first three months in the island. The coach has formed this technical opinion after numerous visits to schools and clubs, and after accompanying a team to a regional youth tournament in Guyana.

Speaking during a visit to St Catherine, Takashima said, "I noted that their training time, training session is not enough and, besides, I think now two times or three times a week." He said young players in Japan train six and sometimes seven days a week. "So first, I think Jamaican young players need to train harder," he specified, "not only twice a week."

Second, he analysed, "Then I also noted the venue and table tennis board. The table is not so good, very small, you don't have enough tables to train all players here, and also they don't have good gears, I mean, equipment, rubbers, racquets and even table tennis shoes."

His next comment was borne out of his visit to the recent Caribbean Junior and Cadet Championships in Guyana. Speaking in cautious English, he said, "Some of (our) players has no experience to play overseas and play other Caribbean players, so they are not so good to receive the opponents' serves.

"We made a lot of mistakes, so I think one of the reasons is that they don't have a lot of experience to play different type of players," he said, "and so I noted that we need to plan serves and (how to) receive (them).

"This is number one," he emphasised, "and, also, I noted that our footwork is very poor compared to other countries' players.

Takashima aims to strengthen Jamaica's preparation for international tournaments. "I also discussed with Table Tennis Jamaica," he informed, "that we want to put a better training programme for international matches, so I'm now requesting to make more training sessions before the championships."

"This we must do," he stressed.

Takashima, a former Japanese national player who has done coaching work in Bahrain and the United Arab Emirates, loves Jamaica and its warm weather so far. "I enjoy it, very beautiful climate and weather compared to Japan," he smiled.

His home country is enjoying a resurgence in table tennis on the world stage at the moment and Takashima explained that the opening of a national training centre 12 years ago is paying dividends. "Now the young players, like junior high-school students, the promising talented players, now train together in the national training centre, so I think (this is) one of the reasons," he explained.