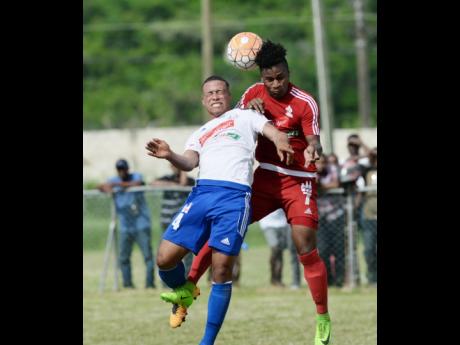 Jermaine Barnaby
Portmore’s Damano Solomon (left) and UWI’s Allando Brown in an aerial battle for the ball during their return leg semi-final match in the Red Stripe Premier League at the UWI Bowl yesterday.

Michael Binns' free-kick carried Portmore United to a 2-0 win over UWI in their second-leg Red Stripe Premier League (RSPL) semi-final at the UWI Bowl yesterday and earned last season's beaten finalist a 3-2 aggregate win and a place in the final against Arnett Gardens.

An own-goal eight minutes from time brought the Linval Dixon-coached team level at 2-2, on aggregate, and sent the match into extra-time. However, midway the second period of extra-time, Portmore received a free-kick wide on the left, but with no immediate danger in sight, Binns struck a precise shot over goalkeeper Amal Knight and into the top corner to put the visitors into the final.

Dixon was full of praise for his midfield dynamo and his very important contribution. "It was a very special goal. He is a player that does not back away from responsibilities. He wants to be highlighted; he wants to take up the mantle and be the man. Today, he dug deep and found a beautiful one (goal), and we are pleased for him and the team," Dixon said afterwards.

He also commended the team for its determination to get back at UWI. "It took guts and togetherness. This team's been fighting the entire season and we really set our sights on going back to the final. This year, we want to go one better, but it's going to take a collective effort," he said.

In a lacklustre first half, UWI got the better of the chances, but Davion Garrison was the most guilty of not making the most of the opportunities. Portmore, led by Ricardo Morris, created a few chances themselves towards the end of the half, but Javon East failed to capitalise on two occasions.

After the break, it was Portmore who looked the more dangerous, with Morris wasting two great chances. However, with eight minutes to go, Morris played East in and he slipped a pass to Foster, but the onrushing Rochane Smith got the last touch past his goalkeeper, Knight.

Portmore's game turned up a notch after that, and they took the momentum into extra-time. It was no surprise when Binns found the winner with his spectacular free-kick with nine minutes left.

"We are not disappointed," said UWI's coach Marcel Gayle. "I think we got enough chances, but we just failed to take advantage of our opportunities," he said.