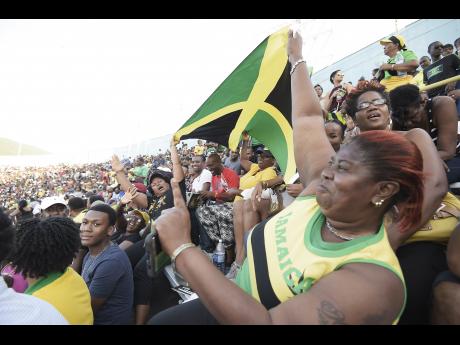 Gladstone Taylor
A section of the large crowd at Saturday's JN Racers Grand Prix inside the National Stadium.

The Racers Track Club management yesterday apologised for a ticketing mix-up that saw approximately 100 fans arriving at the National Stadium to witness Usain Bolt's final race in Jamaica at the JN-sponsored Racers Grand Prix on Saturday, to find persons sitting in the grandstand seats they had already bought.

Those fans had ordered tickets through the online ticket option provided by the meet organisers - the Racers Sports Management Company, an offshoot of the Racers Track Club - and were assigned seat numbers.

According to a release from Racers Management yesterday, those 100 tickets, of the 4,000 sold, were "erroneously duplicated".

"As organisers became aware of this issue, all affected purchasers were notified before the event to have their seats reassigned. However, on event day, as the excitement, intensity, and attendance numbers continued to increase, it eventually became clear that some ticket holders were not aware of this reassignment process. Organisers expediently identified attendees (who were not necessarily the purchasers) unaware of the reassignments, and every effort was taken to mitigate any unfortunate effects, including reassigning seats on the spot and even seating some attendees in cycle track seats, previously reserved for periodic use by event staff," the release said.

"We deeply apologise for any inconvenience caused by this error" the release added.

One fan, Alayne Bennett, said that she intended to write a strong letter to the meet organisers expressing her disgust and perhaps even to demand a full refund of the $14,000 spent to purchase two tickets in the 'G' section of the grandstand.

"I'm disappointed because of the nature of this event in 2017. While I was sitting here, (other) people came to sit down in the same seat. It has left a bitter taste in my mouth and almost spoiled the event for me," she said.

Meanwhile, several other spectators, who went to the stadium to witness Bolt's final race, had problems of a different kind as they were locked out because the 30,000 capacity Stadium was oversubscribed.