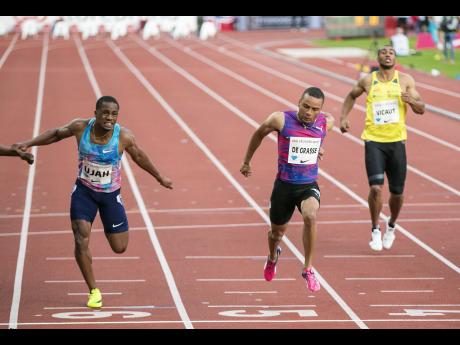 Andre De Grasse is making no secret about it. He will not just be going along for the Usain Bolt retirement party at this year's London World Championships, but instead, will be looking to dethrone the king of sprinting.

De Grasse has been tipped by many to take over the mantle from Bolt when the Jamaican hangs up his spikes this summer, but De Grasse has his sights set on denying the sprinting legend an eighth individual World Championships gold medal.

"Anytime I step out on to the track, I want to do great. I want to win regardless of who is in the race," the 22-year-old said. "I know it is not going to be easy to try and dethrone an eight-time Olympic medallist. He (Bolt) is one of the greatest athletes to have ever done it, and he has done a lot for the sport.

"But I have nothing to lose. I am young, and I feel if I can execute my race, have a great start and stay injury free, I have a good shot. But I won't be disappointed even if he (Bolt) wins."

De Grasse, who has had the opportunity to watch Bolt up close, having finished runners-up to him in the 200m at last year's Olympics and third in the 100m at both the 2016 Olympics and 2015 World Championships, is seeking to capitalise on his oftentimes poor start.

"One of the things he (Bolt) doesn't have is the start, and I believe I can have a great start because I am smaller, so I know if I work on it I can do it," De Grasse said.

De Grasse did admit that the eight-time Olympic champion and 11-time World Championships gold medallist will be greatly missed when he does retire.

"It is kind of like a down feeling because I came into the sport so late, and I wish I had more opportunity to race against him," De Grasse said. "People are definitely going to remember him, and it is going to be a tough time to see him go.

"It is up to me and a lot of other athletes to try and fill that void and to continue to keep making the sport a positive and clean sport, and I feel like a lot of us are going to do great things. It is going to be tough for us to maybe break his world records, but I feel like over the years, it could be done."