Dairy Industries boost for U-21 netballers 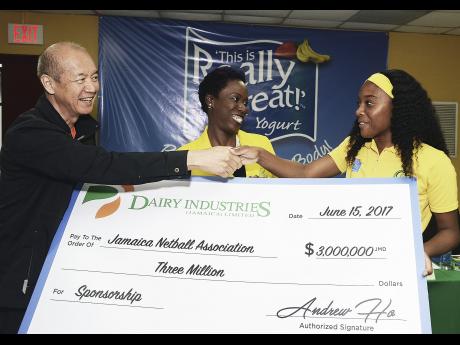 Jamaica Under-21 netballers received a major boost with $3 million in sponsorship from Dairy Industries through its product 'This is Really Great! Yogurt' yesterday.

Ho said his company is committed to helping with the development of Jamaica's netball.

"We were steady sponsors of the National Under-21 team way back in 2000, and we were major sponsors of the 2003 World Championships here in Kingston, and so we thought it was time to renew our support," said Ho.

"We heard of the needs that the Under-21 team had, especially with the Youth World Cup coming up in July in Botswana, and so it sort of fitted our timing," he said.

"The Under-21 team is a great fit for our yogurt brand, and so things fell into place and so we are happy that we could support at this time," Ho added.

Ho said that as part of the sponsorship agreement, Netball Jamaica would receive dairy products as well as cash.

Netball Jamaica boss Daley-Morris said that her association was very grateful to Dairy Industries for the sponsorship.

"I am always happy when corporate bodies come on board and support us, and so we are feeling elated that Dairy Industries is back and they are coming in a big way with $3 million in sponsorship," said Daley-Morris.

The National Under-21 team, which is coached by Janet Guy, is scheduled to leave the island on July 3.