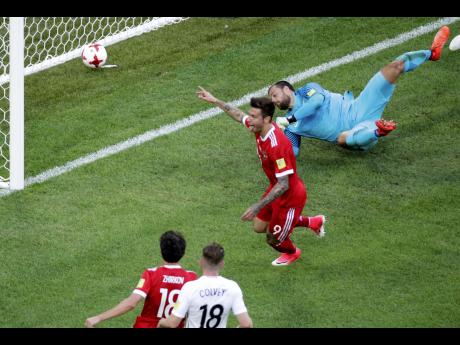 Host nation Russia beat a poor New Zealand team 2-0 yesterday to open the Confederations Cup with a win that was all but demanded by Vladimir Putin.

Russia's president was in the $750 million new stadium in his native St Petersburg to see forward Fyodor Smolov's 69th minute goal add to an own goal by New Zealand defender Michael Boxall in the 31st.

Putin this week demanded better results from the 63rd-ranked Russia team and for the players to perform like warriors. They hardly needed to be in dispatching No. 95 New Zealand, which seemed to find the world stage too big.

Russia's win eases the pressure on their second game, against Cristiano Ronaldo's Portugal in Moscow on Wednesday. The European champions open their Group A programme today against Mexico in Kazan.

New Zealand are now without a win in four trips to the Confederations Cup, and next play Mexico on Wednesday in Sochi.

The Kiwis threatened only with back-to-back chances in the 78th minute: A powerful Ryan Thomas shot saved by Russia captain Igor Akinfeev and Tommy Smith's header blocked on the line.

Russia's opening goal had an ugly finish after two pretty pieces of individual skill once the All-Whites defence needlessly lost the ball.

A chest-high pass to forward Dmitry Poloz was deftly guided into the path of Denis Glushakov who chipped the ball over onrushing goalkeeper Stefan Marinovic. A three-player race to meet the rebound off a post saw the sliding Boxall's trailing right arm get the final touch in a bundle of bodies.

Russia deserved their first-half lead after twice having shots stopped on the line in the opening 10 minutes.