Mills: Bolt has catching up to do 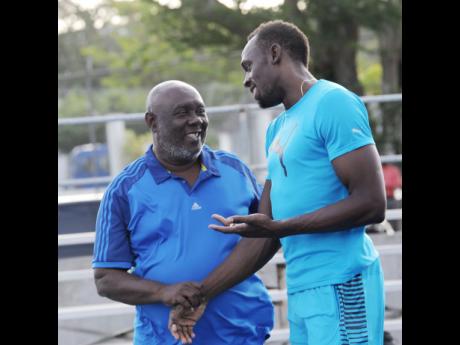 Coach Glen Mills admitted that star sprinter Usain Bolt has some catching up to do in terms of his preparation for the IAAF World Championships, but believes he has more than enough time to get the retiring sprinter into high gear ahead of the August 4-13 championships.

Bolt, will follow up his 10.03 seconds run at the JN Racers Grand Prix earlier this month with an appearance at today's Golden Spikes meet in Ostrava, Czech Republic, in what will be only his second 100m competition since the 100m final at the Olympic Games in August 2016.

Not unaccustomed to setbacks, Bolt, who will only feature in the 100m at the championships in London, missed almost three weeks of training, grieving the death of his close friend, Germaine Mason the former Olympic medal winning high jumper. However, Mills is confident that the sprinter has enough time to gear up before his first run at the event.

"His preparation is not normally where it used to be at this time, so he is certainly has ground to catch up. A number of factors have interfered with his preparation, but I thought he ran brilliantly at the Racers Grand Prix. His 10.03 in his first race in almost a year with the setbacks in place, if we can build on that over the next six to seven weeks, we should be able to be right where we can feel comfortable taking on the rest of the world," Mills said.

"He is only running the 100m, so it's totally different from having to run six or seven races doubling up, but even then, a big chunk of his training has been affected. I am keeping my fingers crossed on what his performance will be tomorrow (today). He will be staying in Europe and training leading up to the championships," added Mills.

Bolt will compete at the Golden Spikes meet for the ninth and final time in his career ahead of his retirement at the World Championships, and will face Cuba's Yunier Perez and Turkey's Jak Ali Harvey, who have clocked 10.10 and 10.15 respectively so far this season.

Mills, who underlined that he is not worried about Bolt's progress this season, also shared the emotional toll that Mason's death took on Bolt.

"It was a big blow; he took it very hard. It affected him in terms of his training because he lost about three weeks of training time, and then getting back into things was slow for him, so I am not sure if he is totally over it.

I am sure that in moments away from training there is remembrance and sorrow and so on but he is a champion and a fighter. In time, he will overcome and be able to continue his life, but we will see how much work we can get in to overcome the period lost," said Mills.

"Anyway, my philosophy is not to worry, but to find solutions, so the worrying part is not for me. What I do is look at the situation, see where the problem is, try to find the necessary remedy to get the job done because worrying only makes matters worse," he said.