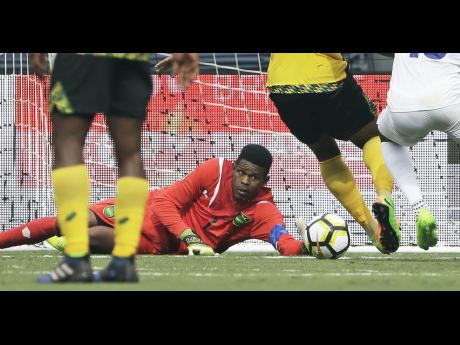 File
Jamaica's goalkeeper André Blake watches the ball after making a save against Curacao during their CONCACAF Gold Cup match in California last Sunday. Jamaica won 2-0.

Having registered a win in their opening encounter, the Reggae Boyz will tonight seek to make it two in a row when they go up against defending champions Mexico in the 2017 CONCACAF Gold Cup.

Action begins at 9:30, Jamaica time at the Sports Authority Field in Denver, Colorado.

Head coach Theodore Whitmore has promised changes for today's match as he was disappointed with the overall performance on Sunday.

"We were a bit too slow in moving the ball around and in the connection in midfield," Whitmore said on Monday.

He added: "We have 23 players and we have to approach each game differently ... . We intend to play the Mexicans a certain way, and it is going to require certain personnel."

The Reggae Boyz, who were beaten in the 2015 final by Mexico, will be aiming to do as they did on Sunday last when they avenged a loss to CuraÁao. Tonight's task, however, should be a much tougher one for the Jamaicans, even though the Mexicans have fielded a weaker team for this tournament.

Both Jamaica and Mexico have three points from their opening game, but the Mexicans sit atop the group as they won their game by a wider margin. If the Jamaicans are to get the better of Mexico and improve their chances of advancing to the quarter-final round, they will have to improve their midfield play and tighten up defensively. The team kept a clean sheet, largely though the brilliance of goalkeeper AndrÈ Blake, the former MLS number one draft pick who is now regarded as one of the top goalkeepers in CONCACAF.

For today's game, Blake will have to again be at his best, while the experienced Jermaine Taylor should again partner Damion Lowe in the centre of the defensive unit. Je-Vaughn Watson will also have to play a leading role in the middle, while the inexperienced but talented Kevon Lambert will have to raise his game significantly.

Darren Mattocks, scorer of Jamaica's second goal in Sunday's win, showed enough hunger and desire to get into the starting 11 and lead the line, following his indiscretion of arriving late for the team meeting.

Cory Burke, Mattocks' partner, may not be so lucky, as Romario Williams, who opened the scoring, should hold on to his starting position.