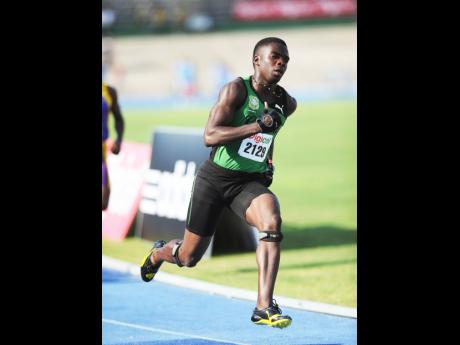 On a day described as "very challenging" by head coach Michael Carr, Jamaica picked up their first medal at the 10th IAAF World Under-18 Championships in Nairobi, Kenya, when Tyreke Wilson bagged bronze in the 100 metres.

A heavy downpour forced the athletes to run in puddles, and the South Africans appeared to relish the conditions.

Carr was satisfied with the day's proceedings.

"It was a very challenging day for us - a day of mixed feelings, mixed performances, mixed results - but overall, getting that bronze in the final event of the day from Tyreke (Wilson) in the 100m was putting the icing on the cake for the day," Carr said.

"After the semi-final, he suffered a groin injury, and to make matters worse, in the final, it was very cold, and like a warrior, he went out there and the performance was fantastic, and that effort from him was very special," Carr said.

Jamaica will be hoping to get their first gold medal of the Championships today, when the big favourite, Kevona Davis, is expected to win the girls' 100m.

Davis won the final heat of the 100m on the wet track in 11.88 seconds to be the second-fastest qualifier for the semi-finals, slated for 9:10 a.m. today.

Several other Jamaicans advanced to the second round of their events with Anthony Cox one of the most impressive. He posted a personal best of 46.53 seconds to win his 400m heat and advanced as the fastest qualifier. His teammate, Antonio Watson, won his heat in 47.22 to emerge the second-fastest qualifier. The semi-finals will be contested today at 10:45 a.m.

In field events, Owayne Owens advanced from the preliminary round of the boys' triple jump after finishing fifth in his group with 14.75m.