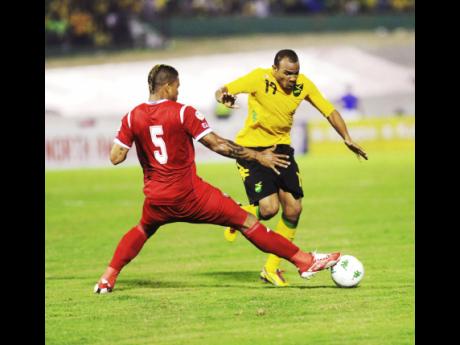 Ricardo Makyn
Jamaica's Rodolph Austin (right) attempts to get the better of Panama's Roma Torres during CONCACAF World Cup Qualifiers at the National Stadium in 2013.

The 32-year-old central midfielder officially joined the club's roster on Sunday on a deal which will last until 2019. Austin was already in Denmark playing with Brondby IF, but that contract expired this summer. During his time at Brondby, he made 106 appearances in both League and European Cup matches, scoring 17 goals.

The former national captain, who plied his trade locally with former Premier League champions Portmore United, has been moving around Europe since 2008 playing with such clubs as Leeds United in England.

The player, who has played 88 matches in which he scored seven goals for the Reggae Boyz, was forced to leave England in 2015 after a three-year deal with Sheffield Wednesday fell through when he was denied a work permit. He eventually moved to Norwegian club SK Brann.

While at Esbjerg, Austin will wear the No. 8 jersey.

Austin last played for Jamaica in 2016 in the Copa America Centenario. Two years ago, he captained the national side in the Gold Cup in a losing effort, going down 3-1 to Mexico in the final.