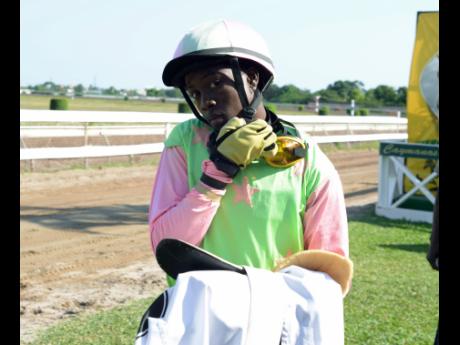 The United States-bred four-year-old filly had to watch from the chasing pack as BUZZ NIGHTMARE, last year's Gold Cup winner, disputed the lead with inform SIR BUDGET from 3 1/2 furlongs out.

The two speedsters ripped splits of 22.1 and 45.1 into the lane, still clear of pursuers before engaging in a bumping match, veteran jockey Ian Spence the culprit aboard BUZZ NIGHTMARE when resorting to left-hand whipping inside the final furlong.

As the battling pair moved off the rail, 2-1 chance CHOO CHOO BLUE and ANOTHER BULLET started motoring as a team on the inside, hitting top stride midway the last half-furlong to shoot past the tiring leaders.

BUZZ NIGHTMARE, who carried 57.0 kilos, giving weight all around, finished third but was disqualified and put fourth behind SIR BUDGET.

Patterson emerged the day's top rider with two winners on the 10-race card that got progressively tougher after the fourth race.

The apprentice opened his account with 4-1 shot THE NEXTBIGTHING in the sixth event, taking over from LOLA GREY a half-mile out in the seven-furlong race.

CRAFTY STAR sunk the final dagger in the closing event at odds of 25-1, going gate to wire in the 1820-metre race with apprentice Orville Edwards.