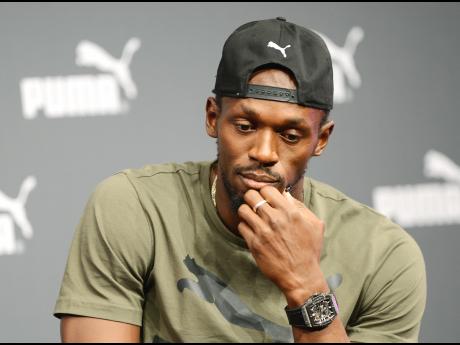 One hundred and four days since the passing of his close friend Germaine Mason, Usain Bolt says he is dedicating his IAAF World Championships performance to the Jamaican-born former British high jumper, who died in a bike accident on April 20.

Mason and Bolt had developed a close bond over the years and the two were among a group of friends who were out partying the very night that the 34 year-old lost his life in the vicinity of the Harbour View roundabout.

Bolt, who struggled to deal with the tragic death, admitted that it has been a difficult reality for him to accept, but noted that the pain of losing Mason is also a part of his motivation to do well in London this weekend.

The 30 year-old Bolt is set to retire at these World Championships after competing in the 100m and 4x100m events.

He says that knowing that his friend would have wanted him to close his legacy at the World Championships with a win, serves as a strong motivator for him.

"For me it was a rough time, I never had somebody pass away that close to me before," said Bolt. "It set me back a little bit, I didn't train for three weeks or so and my coach (Glen Mills) gave me my space but at some point the close net of people around me got me to get going again."

"Germaine was looking forward to coming to my last race to see me compete and finish off my legacy and that helped me to get going. It was hard but it became a positive, I want to do it for him and his family and everyone around us," Bolt shared.

Mason, the Jamaican record holder in the high jump event and won several international medals for Jamaica before he decided to represent Great Britain, the country he won a silver medal for at the 2008 Olympic Games.