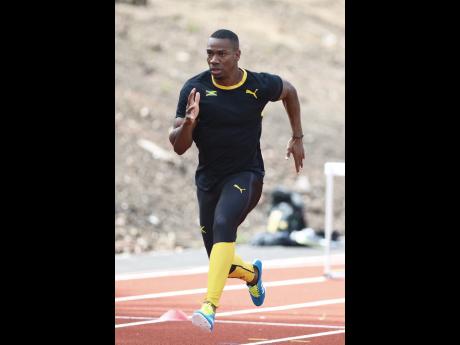 Andre Lowe: Well, the time has come for one of the greatest sportsman to call it a day and move on to retirement. Usain Bolt takes focus in the 100 metres final today!

Raymond Graham: And his fans will be very nervous as they all want him to leave on a high note, and definitely, this will be the most nervous time of his long and illustrious career

Andre Lowe: I'm not so sure about that? I'd say the last two years were more nervous for him given what was at stake. Andre De Grasse is out of the championships and people think that has boosted Bolt's chances, but in truth, Yohan Blake was always going to be Bolt's biggest rival; De Grasse was not in any shape to challenge the big Jamaican.

Raymond Graham: I was in no way worried about De Grasse because all season he has not done anything to impress me as I see Bolt's threat coming from elsewhere

Andre Lowe: Blake has been extremely impressive in training, everyone around him including Bolt, knows he's in amazing form the kind of form he has not been in since 2012. Bolt thinks he needs to run 9.8 or lower to win, and he's absolutely right.

Raymond Graham: I like Blake, but I am a bit concerned that he has not competed since the National Championships and could have lost some of the competitive edge

Andre Lowe: He'll get that back by the final. Both he and Bolt will be sharp. I expect Blake and American Christian Coleman to do the early running but Bolt's last 50m is said to be fully tuned right now. Bolt for the win in 9.79 seconds. Blake second in 9.85, and it's anybody's guess who runs third ... maybe Coleman or Justin Gatlin, who I heard is quietly doing well in training.

Raymond Graham: Coleman could be the one to spoil the party here as he is the fastest man in the event this year, but like Blake, lack of competition could hurt his chances, and being so inexperienced, I am going with Bolt to win in 9.83 over Blake 9.86 with Coleman third.