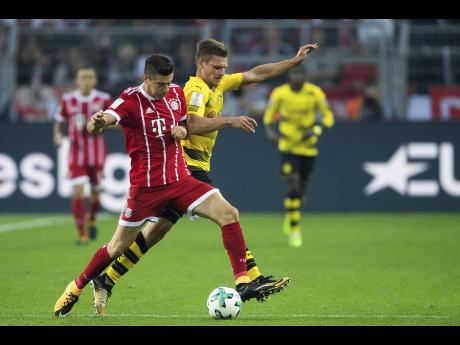 AP
Dortmund's Lukasz Piszczek (right) and Bayern's Robert Lewandowski vie for the ball during the Supercup football final between FC Bayern Munich and Borussia Dortmund in the Signal-Iduna-Park in Dortmund, Germany on Saturday. (Marius Becker/dpa via AP)

German football's first competitive use of video assistance failed due to a technical fault Saturday when a debatable goal was awarded in the Supercup between Bayern Munich and Borussia Dortmund.

Robert Lewandowski scored for Bayern to level the game 1-1 but the goal may have been offside following Sebastian Rudy's ball over the Dortmund defence. Referee Felix Zwayer consulted video official Tobias Stieler, who had to make a decision without all the technical tools he should have had at his disposal.

"The calibrated lines, which are normally available and support the video assistant in offside decisions, were not yet available due to technical problems," the German football league and federation said in a joint statement on Sunday.

The goal was awarded. The game ended 2-2 after normal time and Bayern won 5-4 on penalties.

"What's positive is that the decision (to award the goal) was correct. That's the top priority and that was achieved," former referee Hellmut Krug told news agency dpa.

Krug, who is now working with the video assistance team, added, "But in this case you have to admit that we were lucky at this time, that the decision could be confirmed."

The league has until Aug. 18 to iron out the issues before the season begins.

"It's better that it happens now and not in two weeks for the start of the Bundesliga," league spokesman Michael Novak said.

Video assistance was also at the center of a questionable decision in the Dutch Super Cup between Feyenoord and Vitesse.

Rather than award what should have been a penalty to Vitesse, the referee allowed play to continue for Feyenoord to increase its lead to 2-0 on a counterattack.

However, the referee then consulted his video assistant, the goal was ruled out, and Vitesse equalised from the subsequent penalty.

The match finished 1-1 and Feyenoord went on to win on penalties.