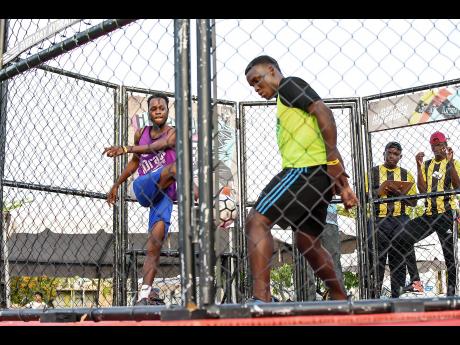 Contributed
Kevin Kellyman (left) fires a fierce shot on goal that is blocked by Roshede Bald as they squared off in the inaugural National Final of the LASCO iDrade Cage Football Challenge on Sunday at Mandela Park in Half-Way Tree. Bald walked away with the title, claiming $50,000 and a year’s supply of LASCO iDrade.

Bald used his strength and skill in the one-on-one challenge played inside a cage to walk away with the title, $50,000 winning incentive, and one-year supply of iDrade energy drink. Kellyman received $20,000 and a six-month supply of iDrade.

Bald admitted that the competition, which is new to Jamaica, is very challenging.

"I am elated in winning the competition to become the first champion. It was a challenging competition, tough on the body but enjoyable," Bald told The Gleaner.

Catherine Goodall, Lasco marketing manager for beverages, said that the competition was used to give the communities a chance.

"It's not new, but first time in Jamaica. We partnered with Creative Sports to stage the competition over a two-month period, and it was a success. The different communities came out and supported the competition," Goodall shared.

"We are satisfied with the turnout in the communities, and it was great for the people to win cash prizes and iDrade drinks," she added.

Meanwhile, in the Jenny Jenny Production/iDrade challenge played on the day, Sadike Palmer of August Town walked away with $20,000.