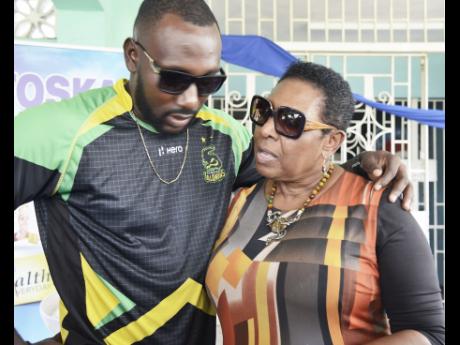 Ian Allen
Jamaica Tallawahs cricketer Keswick Williams (left) getting some advice from Minister of Sports Olivia Grange at a Foska Oats-sponsored brunch for the Tallawahs team at Melbourne Cricket Club on Thursday.

Sport minister Olivia Grange has said that the Government has "big plans" for the upgrading of the Trelawny Stadium.

Grange made the announcement while speaking at the Jamaica Tallawahs' official team brunch at the Melbourne Cricket Club on Thursday, and said the work will be treated as one of Jamaica's 55th Independence anniversary legacy projects.

One upgrade completed so far is on the venue's irrigation system.

"We do not have to depend on the National Water Commission anymore for water. We have our own water," Grange said.

The Government plans to meet with the Planning Institute of Jamaica next week to discuss sources of funding for a cricket academy, which is planned to be the first phase of expansion to be carried out on the stadium.

But the minister said that the stadium can be used in its current state.

"Sri Lanka, when they come later this year, will use the Trelawny Stadium for warm-up matches," she said. "So the facility is in a good enough condition that we can use it as we speak."

The Government is looking to invest in the stadium as a means of improving sport tourism in western Jamaica.

Grange said that she is also seeking more sponsors for the project and Tallawahs owner Jay Madhu immediately raised his hand to show his interest.

"I want to encourage the owners of the Tallawahs to put some packages together," Grange said. "We have enough rooms near the Trelawny Stadium. So you can utilise the facility.

One complaint that has been raised about the facility is that there is not enough business activity taking place in the community surrounding the stadium. However, Grange said that the location is not as isolated as many think.

"I can't speak to the other plans at this time, but it's just a matter of how we utilise the facility and how we make it attractive because it's the Jamaica Cricket Association's base," she said. "We have people who are into running and health - the whole health programme - that use the facility. I know there are plans for the development of villas and other such facilities in and around the area. So the potential is great, and it's really going to be a major development and will have tremendous impact on the communities around."

The Trelawny Stadium cost around US$30 million to build and was opened in 2007 to host the commencement ceremony of the ICC Cricket World Cup. It has since been used occasionally for warm-up games for both the men's and women's West Indies cricket teams, football matches, and entertainment events such as the Jamaica Jazz and Blues Festival. However, public opinion is that the venue is fairly underused.