Sky's the limit for Thomas 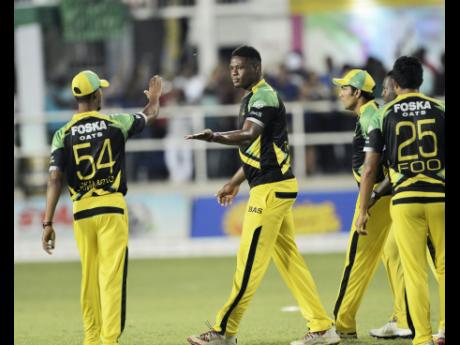 Ian Allen
Members of the Jamaica Tallawahs team congratulate Oshane Thomas (centre) after one of his wickets against the St Kitts and Nevis Patriots at Sabina Park on Wednesday night.

Exciting Jamaican pacer, Oshane Thomas, said he plans to continue his excellent bowling form when the Tallawahs take on the Guyana Amazon Warriors in the Hero Caribbean Premier League tonight at Sabina Park.

The 20-year-old Thomas turned in an inspiring Man of the Match bowling performance to claim figures of 3-31 as the Tallawahs recorded a convincing 41 runs win over the St Kitts and Nevis Patriots on Wednesday.

"Going forward, I just have to hold up my head and keep bowling fast and get the ball in the right areas and the sky's the limit," said Thomas.

"It is a big game but I played against the Warriors in last year's competition and so I know most of their batters and so I just need to work on their weak areas and just continue to bowl well," he said.

He added: "I know that the other teams will be watching and coming at me and so I just need to remain focused."

Reflecting on his performance against the Patriots, Thomas said: "I know that two of the wickets that I got against the Patriots are big name players, but I just stuck to my bowling plan and it paid off. I had planned to bowl wide to Brathwaite because he weak to the wide balls.

"Chris Gayle does not like the ball coming into him and I so bowled with a lot of pace and looked to get the ball swinging into the left-hander and that is what gave me his wicket."

Thomas, who represents Melbourne Cricket Club in the local leagues, got up to speeds close to 100 mph during his spell. He added that having recently recovered from a hip injury, he was surprised by the pace at which he was bowling.